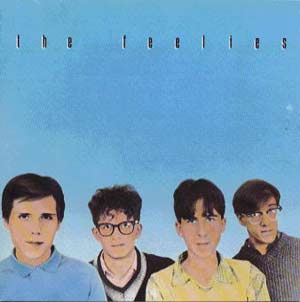 The New York Times today celebrates the return of the Feelies, the legendary New Jersey band whose minimal, focused strumming influenced bands from R.E.M. to Sonic Youth. The Feelies are opening for der Yoof at a free show in Battery Park this Friday night (which doesn’t sound like any fun at all, arrrgh!), and the Times article is appropriately effusive, calling the band a “vivid apparition,” and quoting various musical luminaries who give them props. But despite their influence, the band never really had mainstream success, and it seems like they’re below the radar of most of today’s kids. Unbelievably, their brilliant 1980 LP Crazy Rhythms isn’t even on iTunes. Well, dammit, I’m getting out my scratchy old vinyl and putting it on the record player.

Part of the Feelies’ problem is that they fall between the cracks of genre. Too weird to take advantage of the interest in alt-Americana that R.E.M. eventually hit #1 with, but too light (and way too fast) for most connoisseurs of Velvet Underground-style drone, the band are still a strange anomaly. Most of Crazy Rhythms features, um, exactly that, a kooky punk-speed double-time back beat, sometimes decorated with a goofy synthetic wood block or the plainest fake cymbal. But while punk rock speeds through verses and choruses in quick, 2-minute blasts, the Feelies are speedy but also take their time. Album opener “The Boy With the Perpetual Nervousness” lasts five minutes, allowing long instrumental sections between deadpan verses about the boy next door who “never helps out in the yard” (presumably practicing his guitar in the basement), but maintains its jumpy intensity all the way through.

Founding member Glenn Mercer emphasizes the band’s minimalist approach in the Times article, sounding like Mies van der Rohe as he claims that their sound “is defined by what we left out and didn’t play, as much as by what we did.” While that may be his intent, I’ve always felt like the Feelies were warmer, richer than that stated minimalist agenda makes it seem. “Original Love,” with its quick chord changes and reverby, choir-like background vocals, sounds almost as full as later R.E.M. But their cover of the Beatles’ “Everybody’s Got Something to Hide (Except Me and My Monkey)” is definitely straightforward: the beat shuffles along without even a cymbal, the guitar strums brightly, and that’s really about it. But by the end, with a lead guitar holding a single note, the track achieves a sublime, hypnotic ecstasy, too fast for a guy my age to dance to, but I sure tap my feet.

MP3: “The Boy With the Perpetual Nervousness”