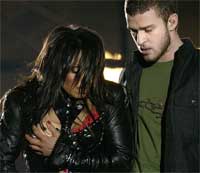 Yes, doctor, we know that it was way back in 2004 when a couple middling pop stars engaged in a flirtatious dance routine during a Super Bowl halftime show that ended in the brief revelation of a boob, but the event apparently still haunts our nightmares. By that I mean, of course, that it’s “working its way through the court system,” but there was a decision today that may mean an end to our cruel suffering is in sight: a federal appeals court today threw out the original $550,000 FCC fine against CBS for the “wardrobe malfunction.” That’s right, the 3rd U.S. Court of Appeals is pro-bazoom, or at least fleeting bazoom, citing the “nine-sixteenths of one second glimpse” of the breast in question in their decision. But it felt like an eternity!!! Mostly they just pointed out that the FCC had never fined fleeting indecency before:

Like any agency, the FCC may change its policies without judicial second-guessing. But it cannot change a well-established course of action without supplying notice of and a reasoned explanation for its policy departure… Its orders constituted the announcement of a policy change — that fleeting images would no longer be excluded from the scope of actionable indecency.

The decision mirrors a 2007 federal appeals court ruling that struck down fines against Fox for “fleeting profamities” uttered by Cher and Nicole Richie on live awards show broadcasts. That case is set to go all the way to the Supreme Court, which is apparently the only way we’re going to get over this. Maybe Canada could prescribe us some anti-depressants?