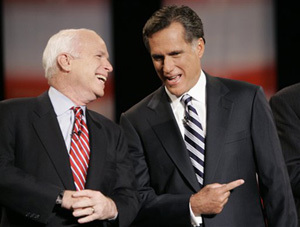 So Mitt Romney is apparently at the top of McCain’s VP list. Reasons, according to Republican insiders who spoke to the Politico:

(3) He is an established campaigner who can be trusted to stay on message.

(4) His roots in Michigan, where his father was a governor, may help deliver a crucial swing state.

Okay, basically this comes down to money. Reasons 2 through 4 are silly. He was vetted, yes, and the media found nothing but flip-flops and inconsistencies. He is a experienced campaigner, but he wasn’t very good in the role. I saw Romney speak a bunch of times, and his speaking skills and small-group skills don’t match his presidential looks. There’s a reason why he only won a handful of states.

And speaking of winning states, it isn’t very likely that Michigan, a state that prefers Obama by seven points, is going to vote for McCain just because his VP’s dad was governor 40 years ago.

So like I said, this is all about money. Here’s the tricky thing. McCain is committed to the public financing system — he was hammering Obama for opting out, remember? What that means is that McCain has 84 million government-supplied dollars to spend from the convention until election day. He can only use the money Romney would raise before the convention. So if he chooses Romney in early August, which would be relatively standard, he would have just 30 days or so to take advantage of Romney’s fundraising abilities. Is that an opportunity so great it could sway McCain’s choice? I’m doubtful.

Alternatively, McCain could choose Romney and then, with a sigh, say that Obama’s decision to opt out of the public financing system has broken the system forever and that now, he too will have to opt out. No amount of sighing is going to keep that from being a PR disaster.

Here’s another complication: According to the Politico, McCain intends to pick his VP right after Obama makes his selection, in what is being called a “bounce-mitigation strategy.” If the Obama campaign wants to negate Romney’s fundraising power, it can just wait until the convention to make its pick.

Or — and this would be super crafty — if it thinks Romney is a terrible pick that will help Obama win the election, it can name Obama’s pick early, adding incentive for McCain to go ahead and give Romney the nod. Democrats haven’t really been convinced of Romney’s seriousness as a national candidate.

Listen, if you made it through this much horse race speculation, I hope you at least took a moment to check out our debate on the future of America’s Iran policy.

Update: David found me in meatspace and pointed out that because McCain has a joint fundraising operation set up with the Republican National Committee, the RNC has what is essentially a giant slush fund that Romney can direct money into. That money would then be used by the RNC on the presidential race and on congressional races. So McCain can remain within the public financing system while indirectly taking advantage of Romney’s fundraising prowess.