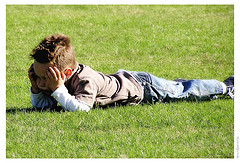 When you’re at work, you probably sometimes get emails that you don’t want to deal with. Maybe you missed a deadline and have yet to ‘fess up, or are supposed to meet with your boss and know it’s going to be ugly. But eventually you deal with it, because you’re responsible and know you can’t avoid the situation forever.

Unless, of course, you’re the Bush White House, in which case you stick your fingers in your ears and start singing loudly and shouting “I’m rubber and you’re glue!” every time your co-workers try to bring up the issue. From the New York Times:

The White House in December refused to accept the Environmental Protection Agency’s conclusion that greenhouse gases are pollutants that must be controlled, telling agency officials that an e-mail message containing the document would not be opened, senior E.P.A. officials said last week. The document…ended up in e-mail limbo, without official status.

Now, “e-mail limbo” is certainly a concept with which the White House is familiar, though it’s not totally clear how they played this one. Did they open the email in order to reply to it, but leave the attached report untouched? Or did they just take one look at the subject line and start a second email thread about how they weren’t going to open the first one? They must have looked at something, because for the past week they’ve been pressuring EPA officials to cut huge sections of the supposedly unseen report. The final version, due out as early as next Wednesday, will contain no conclusions, only a general discussion of the issue. What is the White House trying to hide? According to the Times article, a conclusion estimating that the government could save up to $2 trillion over the next three decades by strictly regulating greenhouse gas emissions. You’d think an administration $400 billion in debt would be shouting that number from the rooftops.

But this kind of knee-jerk anti-regulatory reaction defies all logical engagement. Everyone already knows that greenhouse gases are bad for the environment—Bush has even said so himself. To ignore that reality for the sake of ideological purity is childish, and its repercussions will last a hell of a lot longer than it would have taken to read one uncomfortable email.