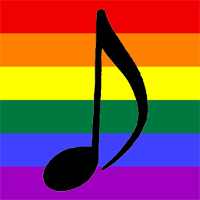 As we approach LGBT pride celebrations around the country this weekend, I’m reminded of the hardships we queers face. Sure, discrimination’s bad; being used as a wedge issue in political campaigns kind of sucks; friends’ well-intentioned attempts to set you up with their other gay friend can be a little awkward. But honestly, you know the worst part about being gay? The music. Seriously. Say you feel like gathering with your fellow queers for an adult beverage, or maybe celebrating the political accomplishments of the past year at a parade, or something. You’ll be forced to endure 10,000 spins of “It’s Raining Men,” endless ABBA, and an insufferable genre of music I call “Self-Help House”: big piano chords accompanied by a wailing diva assuring you that “You can do it/if you believe it,” or whatever. It’s enough to make you swear off identity politics.

But before you switch teams, rest assured that there’s good queer music out there. Here’s an alternate playlist for your Pride weekend parties, complete with videos.

This neo-disco number unites the awe-inspiring Antony of Antony and the Johnsons with a propulsive electronic beat. Despite (or because of?) the track’s obtuse lyrics (“Now that I’m older/The stars should lie upon my face”), it still evokes a sense of victory.

This Boston duo toured with Cyndi Lauper on the “True Colors” tour, but their cabaret-inspired music couldn’t be more different from “She-Bop.” “Reconnaissance” remembers the wild nights of your teenage years, “stealing flamingos and gnomes/from the dark side of the lawn.”

With the subject matter on last year’s A Weekend in the City including queer themes, lead singer Kele Okereke inched out of the closet. He still hopes not to be known just as the “black gay guy” in the indie band, but with songs this universal, he shouldn’t worry.

Like it’s wistful-chord forerunner, The Cure’s “Push,” this track from our favorite Canadian twins laments lost love, not exactly the most celebratory sentiment for Gay Pride weekend. Yet the soaring guitar lines and admission that “I really like to cry” gives it an unexpected euphoria.

While I suspect that lesbian rapper God-Des exists only on gay network Logo, this straightforward track has a sensual groove and a winking sense of humor; plus, at the end, she gets the girl.

The Gossip – “Listen Up”

Here the New York combo set their disco-punk to a cheeky video about gender bending that seems to be taking place in some snazzy European city with good public transit options.