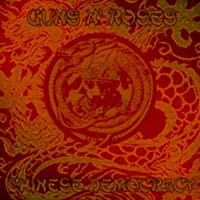 Guns and what now? Oh yeah, there used to be a band called Guns N’ Roses, I guess, back in the 19th century or something. For some reason they stopped making music, and then the wait for their new album, Chinese Democracy, stretched into the ridiculous. Okay, it’s actually been 14 years since the band’s last new material, and now a set of what appear to be real G n’ R tracks have leaked online, reports Billboard, prompting a quick cease-and-desist from the band’s management. Yesterday, the music site Antiquiet.com briefly posted nine tracks, which have now spread about the intertubes like some sort of liberty-based political system in a large, crowded country. So, do they suck?

Well, if you believe the commenters on Antiquiet, not hardly. “To call this groundbreaking is like saying outer space is ‘big,'” explains Johnny Firecloud, and Sam can’t even muster up a complete sentence, gurgling, “the energy the musical diversity!!!!” Yes I said yes I will yes!

After the jump: Check ’em out yourself, if you dare…

But are these really real G N’ R tracks? Billboard‘s done their research, reminding us that six of these songs have been leaked already in earlier versions, but these are purported to be “mastered” and “finished.” One of the three never-before-leaked songs was performed live by the band in 2001 and 2002. Stereogum has some easy-to-enjoy YouTube versions of a couple tracks (which they’re calling “underwhelming”) and you can listen to them here:

Hey, Axl’s getting topical, singing “Blame it on the Falun Gong/
They’ve seen the end and you can’t hold on now.”

In it, Axl croons, “It’s not a question whether my heart is true,” but I guess the question is whether you can get your heart to finish an album, ay, ay?

As of yet, there has been no announcement of an actual release date, but we’ll keep you appraised of developments as they unfold.