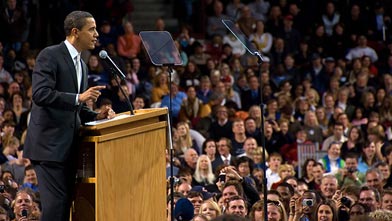 Barack Obama is not unilaterally disarming.

You can be forgiven for thinking that he is. It’s the most natural response when you see the report that MoveOn.org is shutting down it’s 527, and raising and spending money only through it’s PAC.

In a letter to supporters, MoveOn.org chief Eli Pariser explained the decision:

in light of the new politics offered by Barack Obama, I’ve come to believe it’s time to close the 527 forever—and to challenge organizations on the right to do the same thing.

That means that we won’t raise any money for our election work from foundations, unions, or even individuals who want to give over $5,000. It’s an all-in commitment to the small-donor way of doing things. But the time is right to take the leap.

Obama got the DNC to give up fundraising from PACs and lobbyists, and now has one of the progressive movement’s leading independent groups sacrificing its ability to raise funds through its 527, which can accept big money from labor unions, foundations, and rich donors with fat wallets. Instead, MoveOn will accept money exclusively through its PAC, which can only take money from individuals or groups donating less than $5,000. Are other independent groups next? Will the entire progressive movement neuter itself in a quest to raises its standards to match Obama’s?

The answer is no. Consider what MoveOn is sacrificing. According to Pariser, the group hasn’t run any activities through its 527 since the 2004 elections. Of the $46 million MoveOn has raised since 2005, only $1.02 million has come in the form of donations larger than $1,000. No donations have been larger than $5,000. (George Soros did donate $2.5 million in 2004.) At this point, MoveOn effectively has no large-donor program to sacrifice. It can continue doing the work it is doing without interruption.

In that sense, this announcement was a formality, or a play for some positive press. What it really does, however, is underscore how well positioned progressive are to play in Barack Obama’s Washington. It is a movement that (with the exception of the occasional Soros) is built on the backs of thousands of small donors who, in truth, are better for the movement. The expected return on their investment always remains the same: the advancement of progressive principles. Large donors have expectations that can shift if the government’s ability to win them power or money changes. Barack Obama wants small donors to be the power brokers in his charge to the White House; in that sense, the movement he leads was already custom-built for him.