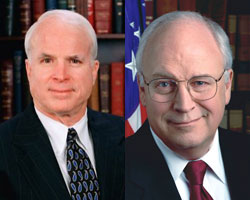 John McCain has been on both sides of a lot of issues. He hated social conservatives leaders; then he embraced them. He opposed the Bush tax cuts for the wealthy; now he supports them. He said Roe v. Wade shouldn’t be overturned; now he says it should.

So it’s not surprising that McCain has had a diversity of views about Dick Cheney. In early 2007, when he was gearing up his presidential run, McCain was critical of Cheney, saying, “The president listened too much to the Vice President… Of course, the president bears the ultimate responsibility, but he was very badly served by both the Vice President and, most of all, the Secretary of Defense.”

But in 2004, when McCain was campaigning for the Bush-Cheney ticket, McCain said Cheney is “one of the most capable, experienced, intelligent and steady vice presidents this country has ever had.”

And most disturbingly, McCain told a Cheney biographer in 2006 that he would want Cheney serving in his administration, should he be elected president:

“I will strongly assert to you that he has been of enormous help to this president of the United States… I don’t know if I would want him as vice president. He and I have the same strengths. But to serve in other capacities? Hell, yeah.”

If the Democrats are smart, this will be in every advertisement from now until November. (H/T TP)