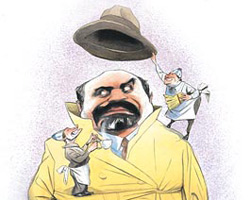 When Democratic members of the Senate Select Committee on Intelligence presented the final installments of the committee’s long-awaited pre-war intelligence investigations to the press earlier this month in the Senate gallery, they demurred when reporters asked them if they intended to pursue possible charges against Bush administration officials whom the senators said had exaggerated the case for war based on the intelligence available to them. “Nothing else would get done, on Clean Air, FISA, anything,” committee chairman John “Jay” Rockefeller (D-WV) explained why the committee would be reluctant to call for possible charges against US officials. “If we pressed for that, it would be like impeachment.”

But there are signs that further federal investigation of at least one aspect of the committee’s inquiry may continue.

Mother Jones has learned that one subject of one of the recent Senate Intelligence committee reports has told associates that he has hired a defense attorney in connection to a federal investigation. Pentagon civilian official Harold Rhode, a civilian employee of the Pentagon’s Office of Net Assessments who participated in controversial meetings with Iranian arms dealer Manucher Ghorbanifar in Rome and Paris, did not respond to messages sent to his home and Pentagon emails inquiring about the Senate’s report on the Ghorbanifar channel, and questions over a possible federal investigation involving him and the hiring of an attorney. Calls to his home went to a fax machine and he did not answer his Pentagon office phone over the past several days.

The Senate report found that former Reagan administration consultant and Iran contra figure Michael Ledeen had brought two Farsi-speaking Pentagon officials—Rhode and Larry Franklin—to a December 2001 meeting in Rome with two unidentified Iranians as well as Ledeen’s old Iran contra interlocutor Ghorbanifar, the subject of a CIA burn notice. Also attending the Rome meetings was at least one official with the Italian military intelligence service SISMI, which provided logistical support and a location for the Rome meetings. The Senate report found that Rhode later went to Paris for a second meeting with Ghorbanifar in June 2003—several months after then deputy national security advisor Stephen Hadley had ordered Ledeen and the Pentagon to shut down the Ghorbanifar channel.

Revelations that Iran Contra figures Ledeen and Ghorbanifar were involved in a new channel to the Bush administration set off alarm bells throughout the US government, and prompted multiple inquiries into whether the channel amounted to an unauthorized covert action and a possible counterintelligence threat. The latter issue was never resolved, after a top Pentagon official shut down the counterintelligence inquiry only a month after it had begun.

But the allegation that Rhode had hired a defense attorney raised the possibility that the issue may still be under investigation.

A person who answered the phone in the office of Andrew Marshall, Rhode’s boss at the Pentagon Office of Net Assessments, said he couldn’t comment on Rhode’s status and referred a reporter to Pentagon public affairs.

“Unfortunately, we have nothing for you on this,” Pentagon spokeswoman Cheryl Irwin said.

One clue as to the origin of a possible federal investigation pursuing the US officials’ channel to Ghorbanifar is contained in the Senate Select Committee on Intelligence’s report on the Rome meetings. The report refers to a Defense Department Inspector General investigation of the same matter (that report remains classified), as well as to a Defense Department Counter-Intelligence Field Activity (CIFA) investigation of the Pentagon officials’ meetings with Ghorbanifar.

The CIFA investigation was halted only a month after it began by then Defense Department intelligence czar Stephen Cambone, the Senate report found. The CIFA report raised the possibility that “Ghorbanifar or his associates are being used as agents of a foreign intelligence service to leverage his continuing contact with Michael Ledeen and others to reach into and influence the highest levels of the US government.”

The Senate Intelligence committee report concluded that the decision to end the counterintelligence investigation of the Ghorbanifar channel was “premature,” and criticized the Pentagon for not pursuing CIFA’s recommendations. Among CIFA’s recommendations, that a comprehensive “analysis be conducted of the counterintelligence implications related to the ability of Mr. Ghorbanifar or his associates to directly or indirectly influence or access U.S. government officials.”

The Justice Department would not comment on whether it is pursuing a counterintelligence investigation related to the case.

A spokesman for the Defense Department Inspector General (DOD IG) could not comment on whether the Defense Department Inspector General’s office had recommended that the Pentagon meetings with Ghorbanifar be referred for further investigation. In theory, a person familiar with the process explains, the DOD IG would refer a matter to the Defense Criminal Investigative Service if its audit found possible allegations of a criminal violation. The Defense Criminal Investigative Service would pursue its own inquiry before deciding whether a criminal investigation is warranted, and referring it to the Justice Department.

The Senate Intelligence committee report determined that the Pentagon meetings with Ghorbanifar were inappropriate, but neither unauthorized nor illegal. Indeed, it found that the meetings had been authorized by Hadley, and then deputy defense secretary Paul Wolfowitz, among others. According to the committee report, Rhode remained an employee of the Pentagon’s Office of Net Assessments. Franklin left the Pentagon in 2005 after being indicted in a separate case. Ledeen had no official role in any capacity at the Defense Department during the Bush administration, the Senate report said.