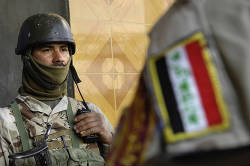 Violence in Iraq has fallen precipitously since January 2007, when the Bush Administration upped U.S. troop presence there. Combined with other fortuitous developments like the Mahdi Army’s ceasefire and fragile alliances of convenience with Sunni tribesmen, the U.S. “surge” strategy has reduced the average number of enemy attacks by 70 percent, from 180 per day in June 2007 to 50 per day last February. But, says the GAO in a report released today (.pdf), improved security has not yielded significant progress toward other reconstruction goals. And now that U.S. forces are beginning to draw down, the Bush Administration has yet to formulate a comprehensive post-surge plan.

The old strategy—dubbed “The New Way Forward” by the White House—outlined a series of political and economic reconstruction goals for Iraq, all scheduled to be achieved by the end of 2007. But, so the thinking was, security first had to be improved, starting with turning the Iraqi Army into a self-sustaining force that could eventually take over for U.S. troops. The results have been mixed: the number of Iraqi units “in the lead” during combat operations has risen to 70 percent, says the Pentagon. But it likewise admits that just 10 percent are capable of mounting operations without U.S. assistance, primarily for lack of logistical capability and proper training and leadership. As of last month, just 9 of 18 Iraqi provinces had taken “lead responsibility” for their own security, according to the GAO report.

So, what of the other goals outlined in The New Way Forward? According to the GAO, progress has been halting. Here are the highlights:

The GAO recommends that the Pentagon and the State Department, in conjunction with other relevant agencies, devise “an updated strategy given important changes that have occurred in Iraq since January 2007.” But in their written responses to the GAO’s findings, both agencies disagreed, stating that no new strategy is required. Rather, says the State Department, “we shall review and refine the strategy as necessary.”