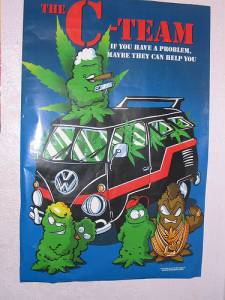 In the quest to discover your neighbors’ vices, the only data more valuable than Google search records might be the records you leave in your toilet. In cities around the world, scientists have begun to measure concentrations of illegal drugs at sewage treatment plants, hoping to get a sense of what people are sending down the pipes. Results so far indicate that Vegas-goers do more meth than some of their midwestern counterparts, Angelenos outdo the Old World in cocaine use, Londoners fancy heroin more than Italians, and everybody smokes a whole lotta pot.

Clearly, the most obvious place for this information is an online quiz site: “If your city were an illegal drug, which one would it be?” Beyond that, the real-life applications aren’t yet clear. Environmentalists are interested in the potential consequences of so many chemicals in the pipes—who wants to find out that, in addition to being filled with prescription drugs, their drinking water is also laced with coke? And no city wants to broadcast that its citizenry is, uh, high (San Diego has already refused researchers access to its sewage). The scientists who conducted the European study (.pdf) think it will be most useful as a real-time data collection tool, not to mention a vast improvement over just asking people how many drugs they do—the study notes that the concentration of cocaine in Milan’s sewage suggests that actual use is more than double the reported rate.

Such information could certainly help law enforcement and public health officials improve their approach to combating drug use, but it’s easy to see how things could get out of hand. What happens when the DEA shows up at your door with a warrant and a urine sample you didn’t know you were giving? You laugh, but the scientist who pioneered this idea believes it would be possible to analyze sewge at the level of “a community, a street, even a house.” In that way, studying poop is like studying Google searches— you’ll probably find out more about your neighbors than you wanted, or needed, to know.