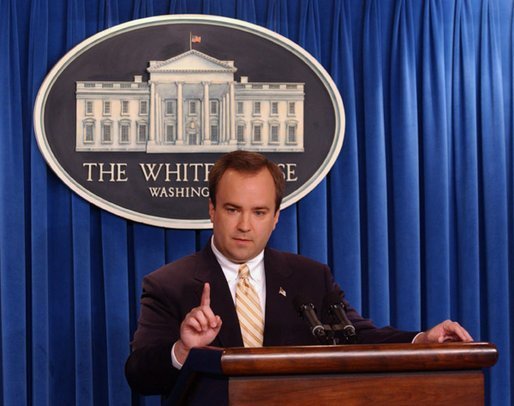 As you are undoubtedly aware, Scott McClellan is traveling throughout the country promoting his book What Happened—and his conscience—to those willing to listen. Earlier this week, I joined an audience for a McClellan book event here in San Francisco, where not long ago McClellan was routinely castigated as Bush’s chief apologist. Here, in the heart of the progressive movement, McClellan would finally learn whether he’s gained a comfortable landing pad among liberals.

As the event kicked off, it was unclear how the audience would respond to McClellan—one woman explained that she didn’t approve of “spilling the beans” to redeem oneself. But what McClellan’s true motivations for the book are, we cannot know. Possibilities range from money to spite to remorse to a genuine belief in the need to advance openness in government.

Yet after sitting through his hour-long presentation, in the same hot event room where I celebrated my high school senior formal, I left with the strong sense that McClellan is fighting hard to steer clear of Bush’s doomed legacy. And one thing seemed clear: McClellan garners much of his recent support, moral and monetary, from many of his former detractors on the left.

To be sure, McClellan tells a good story, one which this audience enjoyed. A Texas boy, raised in a political family that taught him the value of honest public service, finds himself caught in a partisan White House bubble that’s pushing the nation to war. Realizing that he’s wrapped up in a “permanent campaign culture,” he struggles to overcome his loyalty to a President he once loved and return to his founding principles.

And McClellan hit all the right notes. I noticed how the otherwise subdued audience applauded, laughed, and hooted each time McClellan characterized Bush as clueless, Cheney as secretive, and Rove as manipulative. His suggestions for their “tell-all” books were especially well received. (Cheney’s—No More Secrets; Rove’s—The Lies I Told: To Whom and Why. “Scooter” Libby’s—Well, Pardon Me.)

By the end of the event, the couple hundred people attending by and large seemed willing to give him the benefit of the doubt, accepting McClellan’s portrayal of himself as a victim of Washington’s destructive culture. Of the several self-described progressive audience members I spoke with, most could excuse, or even forgive, McClellan for his role as Bush’s press secretary. Several older gentlemen reminded me that he was “just the press guy, he didn’t make policy.” Two women from Berkeley said they forgive him because it was clear that he sacrificed to write the book. A 15-year old high school student, who was excused from class to attend his first political event, was enamored with McClellan’s courage to speak truth to power.

It’s reasonable for progressives, and for that matter Americans, to be aggravated and upset by this administration. But is McClellan—the enemy of my enemy—my friend? It’s disappointing that the left’s visceral disdain for Bush & Co. is so cliché at this point that Bush’s former spokesman, a chief enabler of the Iraq War, is able to leverage caricatured talking points to gain support and empathy.

Sitting in the “ballroom” after the event, I thought back to the night of my senior dance and how I watched a fellow classmate drink down a live goldfish on a dare. This week I witnessed many fellow progressives drink McClellan’s Kool-Aid.

Photo from the Wikimedia Commons.