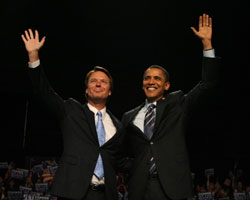 There is a lot of talk among political observers that John Edwards’ better-late-than-never endorsement of Barack Obama will help Obama among working-class (read: white) voters, as Edwards extends his populist mantle to the near-presumptive Democratic nominee. Such talk is overstated, for Obama won’t need Edwards in the fall to prove he’s the populist in the race. With John McCain as the Republican nominee, Obama will have little competition in the most-populist category.

Too many commentators are, for the moment, still stuck in an Obama-versus-Clinton framework. That is so three-days-ago. The race is essentially over. Obama no longer needs to do better than Hillary Clinton among Democratic working-class voters in Democratic primaries. Clinton cannot overcome his lead in pledged delegates, and Obama has surpassed her in superdelegate commitments. (Edwards’ endorsement is indeed one more signal that it’s curtains for Clinton, and the handful of delegates pledged to him presumably will trot over to Obama’s column.) So baring any unforeseen calamities or drama, Obama is it.

That means he no longer has to worry about having more populist appeal to Democratic voters than Clinton. His concern is McCain and attracting blue-collar and white voters in the general election against the Republican nominee. Sure, Edwards can help in that mission. But in some ways, this task is easier.

Clinton made a direct, populist-ish pitch to these hard-pressed voters: I will fight hard for you and promote and create government programs that will directly benefit you and your kids. Though Obama fiercely blasted special interests for corrupting government with political donations and lobbying efforts and called for health care reform, boosting education spending, and devoting billions of dollars to jobs creation programs, his message was less us-versus-them, as he told voters that we can achieve these changes by working together. Clinton promised to be a working-class champion (put aside whether she has been in previous decades); Obama vowed to lead a movement. It’s no wonder that Clinton’s approach resonated with folks who might feel disempowered and economically distressed (racial considerations aside).

In the fall, Obama will not be facing an opponent who makes such a populist case designed for working-class Americans. What McCain offers to voters worried about the economy is nothing but traditional Republican fare: calling for more tax cuts and railing against government regulations and spending. This recipe is rather discredited at the moment. In Illinois, Louisiana, and Mississippi, the Republicans in recent weeks decisively lost three special House elections in districts that were Republican strongholds–even after they tried to tag the Democratic candidates as Obama-lovin’ liberals tied to Reverend Jeremiah Wright. The Republican brand–meaning the Republican message–is in tatters. The Republican Party is in crisis. (As has been widely noted and derided, the hapless House GOPers concocted a new slogan for the coming congressional elections–“the change you deserve”–that also happened to be the slogan for a popular antidepressant drug.)

This is not to say that McCain won’t be able to appeal to working-class white voters. He’s not likely to win them over on the Iraq war, which remains unpopular. Yet he may do so via personality and history–and by playing up his hyped-up independent streak, talking about guns, and pandering to social conservatives. Still, on economic matters of concern to working-class white voters, McCain–who has flip-flopped from opposing to supporting the Bush tax cuts for the well-to-do–will be at a distinct disadvantage. (In a recent Quinnipiac poll, Obama led McCain 47 to 40 percent. Among white voters, Obama trailed 47 to 40 percent.)

Having John Edwards at his side during the general election will help Obama to a limited degree. But that won’t do much to populist-ize the likely Democratic nominee. Obama–as would practically any Democrat–will come across as a populist and working-class advocate not by campaigning with Edwards but by campaigning against McCain.