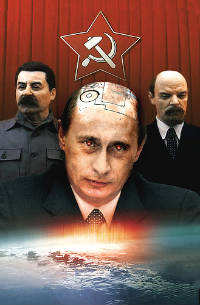 Tomorrow, eight years after taking power, Russian president Vladimir Putin will turn the reigns of government over to his anointed successor, Dmitry Medvedev. And in keeping with the spirit of Putin’s rule, the former KGB man’s departure (and the arrival of the like-minded Medvedev) will be celebrated with one last dose of Soviet anachronism: a parade of military hardware in Red Square, the first such demonstration since the fall of the “Evil Empire.” According to the Wall Street Journal‘s Andrew Osborn, over 100 tanks and mobile missile launchers, escorted by about 6,000 ground troops, will parade past the Kremlin, while more than 30 strategic bombers and fighters roar overhead.

More from the Journal:

Departing President Vladimir Putin said Monday that the parade isn’t irresponsible saber-rattling but proof of the country’s military resurgence. “We are not threatening anyone and don’t plan to,” he told a farewell cabinet meeting. “This is a demonstration of our growing defense capability.”

The parade will be the first time the successor to the Red Army has showed off its armor and missiles on the storied square since 1990, when the faltering Soviet Communist party celebrated the Russian revolution for the last time. Friday’s parade will mark the anniversary of the allied defeat of Nazi Germany.

The display will be watched by Russia’s new president, Dmitry Medvedev, who is expected to speak at the event, which takes place two days after his inauguration…

Mr. Putin has accused the West of stoking an arms race and has used oil revenue to intensify defense spending. The Defense Ministry said earlier this year it planned to spend about one trillion rubles, or about $42 billion this year, compared with $5 billion in 2002. Russia still spends far less on weapons than the U.S. The biggest orders for some of the latest Russian-made weapons come from overseas clients, not the Russian military, analysts said.

Russian state television said the parade would interest foreign intelligence agencies in the same way Soviet displays did in the Cold War when Western experts strained to identify new hardware.

The parade comes at a particularly sensitive time in the Caucasus. For the past few weeks, Russia and Georgia have been trading rhetorical barbs over the status of the small, breakaway state of Abkhazia that, according to some analysts, threatens to boil over into a shooting war. At least two, possibly four, Georgian unmanned aerial vehicles have been shot out of the sky in recent weeks, either by Abkhazia or, more likely, its Russian ally. With Russia looking to assert itself militarily and to prove that the end of Putin’s time in office doesn’t equal the end of its growing regional influence, a dispute over the tiny state of Abkhazia, as unlikely as it may seem, could be just the excuse it needs to launch a war against Georgia.

The Washington Post‘s Anne Applebaum offers an interesting take on the situation, particularly useful for those of us who haven’t been following it too closely. According to Applebaum:

Why would the Russians do that? Or even hint that they want to do that? Russian politics having become utterly opaque, it’s hard to say. Some think Russia began stirring up trouble in Abkhazia in recent weeks to exact revenge for NATO’s recognition of Kosovo — or perhaps to be able to strike quickly, had NATO decided at its recent summit to offer Georgia a clear path to membership, which President Bush vocally supported. Others think that recent Russian pronouncements, some of which come close to recognition of Abkhazian independence, are related to the inauguration this week of the new Russian president, Dmitry Medvedev. Maybe Medvedev wants to demonstrate how tough he is, right at the beginning. Or maybe someone else wants to demonstrate how tough Medvedev is, on his behalf. In any case, someone, Abkhazian or Russian, has shot down at least two and maybe four unmanned Georgian military planes in the past six weeks in what looks like a pretty obvious attempt to create a casus belli.

It might not work — and for the moment the Georgians say they have no intention of declaring war. But Georgia holds parliamentary elections this month, under the leadership of a president who might be grateful for a chance to look bold. If the provocation works, or if Russia does invade Georgia — an emerging democracy, an aspiring NATO ally, a country with troops in Iraq and many implicit assurances of security from Washington and Brussels — then the West will have to come up with a major response, if not military then political and diplomatic.

Photo used under a Creative Commons license from azrainman.