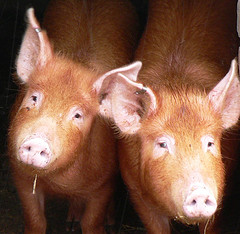 NatureNews reports how doctors used to practise surgery on animals before being allowed to work on patients. Nowadays only a handful of US med schools maintain animal labs. The Case Western Reserve University School of Medicine in Ohio will shut its live-animal lab this month. Next semester, instead of practising on anaesthetized pigs, its med students will use technologies like virtual simulations. It’s all part of a general phase-out of animal labs across the US. In 1994 live-animal experiments were on the curriculum in 77 of 125 medical schools. Now as few as eight use them.

Cost is a factor in the change, since it’s expensive to maintain animals and veterinary staff. But simulations have also developed impressively in the past decade. The most advanced simulators now have ‘haptic feedback,’ providing the sensation that the students’ instruments are touching real tissue—advances that make the use of live animals gratuitous, according to John Pippin, a cardiologist in Dallas who once used live dogs to study heart attacks but now works for the Physicians Committee for Responsible Medicine. The group continues its work to convince the 6% of US institutes that still use live animals to change their ways—notably the Johns Hopkins School of Medicine. NatureNews reports that Jonathan Lissauer, a doctor recently trained at Johns Hopkins, says that sometimes animal surgeries were used “as just a diversion for people who won’t be using those skills at all. I think then you cross the territory from appropriate medical education to something worse than that. There was no medical utility in having pigs die so that people going into psychiatry could play around.”

According to Erin Williams and Margo DeMello in their compelling treatise on how animals suffer in institutional settings, Why Animals Matter: The Case for Animal Protection, the switch from live-animal experiments to simulations was driven in large part because “medical students around the country expressed reservations about killing animals as part of their education, and many refused to participate in dog labs and other classes in which animals were killed…” Could this be a way to identify the compassionate docs from the not so compassionate?

Julia Whitty is Mother Jones’ environmental correspondent, lecturer, and 2008 winner of the Kiriyama Prize and the John Burroughs Medal Award. You can read from her new book, The Fragile Edge, and other writings, here.