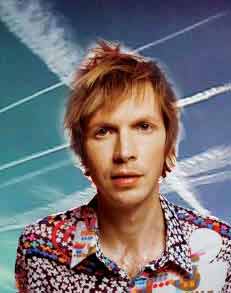 LA-based singer Beck has posted a stream of the first song from his upcoming album Modern Guilt on his website, and while the album’s being produced by Danger Mouse, there’s little mashuppery or Gnarls Barkley-style soulfulness afoot. “Chemtrails” sounds, for all intents and purposes, like Dungen, or more accurately, like the psychedelic rock of the 1960s that inspired them. A rolling beat is way up in the mix, combined with a funky bassline, while way off in the background Beck himself croons in a reverb-drenched falsetto about how there’s “too many people, watching the chemtrails.” Oh, chemtrails. Somebody I know got taken in by this conspiracy theory and would get wild-eyed as they’d launch into wandering explanations of how we’re being secretly sprayed with unknown chemicals for unknown reasons. (Yes, I know I’m inviting some awesome comments. Have at it, shut-ins.) So, is Beck, like myself, concerned and saddened by a populace so consumed by fear that it’s willing to believe (and obsess about) anything, or is he issuing us a warning about the secret government cabal drenching us in brain-controlling dust? Buy my chemtrail psychic cleanser and be free from the unknown effects! Better yet, buy Beck’s Modern Guilt when it comes out next month, because if this song is any indication, it’ll sound like nothing he’s ever done.