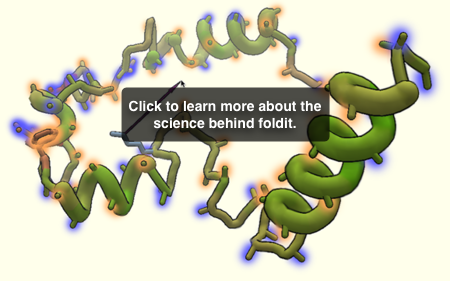 Log enough hours of Foldit and you might play your way into a cooperative Nobel. The new online game is designed to understand how existing proteins fold themselves, as well as to design new ones. The ultimate goal is to tap into that endless supply of human gaming energy to solve really hard problems. You might find yourself part of a cure for HIV or Alzheimer’s or malaria. Or one of the many who designs a new protein to break up toxic waste, say, or absorb CO2 from the air.

There are more than 100,000 different proteins in the human body. They form every cell, make up the immune system, and set the speed of chemical reactions. We know many of their genetic sequences but don’t know how they fold up into shapes so complex it would take all the computers in the world centuries to calculate them. Yet humans’ natural 3-D problem-solving skills, utilized in an addictive gaming scenario, might solve the problems in only years. Or less. At least that’s what a bunch of computer scientists, engineers, and biochemists from the University of Washington are hoping.

The game looks like a 21st-century version of Tetris, with multicolored geometric snakes filling the screen. A half-dozen UW graduate and undergraduate students spent more than a year figuring out how to make the game accurate and engaging. They faced challenges commercial game developers don’t encounter, including not knowing the best results themselves.

After about 20 minutes of training, people feel like they’re playing a video game but are actually mouse-clicking in the name of medical science. “We’re hopefully going to change the way science is done, and who it’s done by,” said Zoran Popovic, UW computer scientist and engineer. “Our ultimate goal is to have ordinary people play the game and eventually be candidates for winning the Nobel Prize.” The intuitive skills that make someone good at playing Foldit aren’t necessarily the ones that make a good biologist. “I imagine that there’s a 12-year-old in Indonesia who can see all this [3-D folding] in their head,” says biochemist David Baker. Eventually, the researchers hope to advance science by discovering protein-folding prodigies who have natural abilities to see proteins in 3-D.

Prodigies can play other prodigies and non-prodigies in multiplayer games, allowing gamers to team up, chat, and create online profiles. Over time, the researchers will analyze players’ moves to see how the top players solve puzzles, then feed these data back into the game’s design so the tools and format evolve.

More citizen science in action. Add to the growing trend in scientist politicians, and you get hope for a rational future.