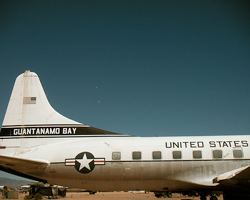 Nearly seven years [after 9/11] not one of the approximately 775 terrorism suspects who have been held on this island has faced a jury trial inside the [Expeditionary Legal Complex Courtroom], and U.S. officials think it is highly unlikely that any of the Sept. 11 suspects will before the Bush administration ends…

“I think it’s a near-impossibility that these cases will be in court before the end of the administration,” said Jennifer Daskal, senior counterterrorism counsel at Human Rights Watch, who has observed numerous court hearings on the island.

“Some of the detainees haven’t even seen their lawyers yet, there’s incredibly complicated issues about access to evidence and discovery, and as we’ve seen with every single case to date, it’s incredibly hard to move through a system that lacks established rules and precedent,” she said. “Every little detail ends up being contested, because it’s an entirely new system of justice.”

Here is the history of trials at Guantanamo (or the lack thereof), by the numbers:

1: The number of detainees held at Guantanamo that have seen his case come to a conclusion. David Hicks accepted a plea bargain and served a nine-month jail term in his native Australia. A former chief prosecutor at Gitmo would later say that Hicks never should have been charged.

14: The number of detainees held at Guantanamo, including six alleged Sept. 11 co-conspirators, who have been charged with crimes. None of them have seen a courtroom for anything other than motions and arraignments.

202: The number of people charged with terrorism-related offenses by the Department of Justice, independent of Guantanamo and the military commissions system. Of those, 116 have seen their trials completed and 80 have been convicted.

775: The estimated number of detainees who have been at Guantanamo for some period of time. None have seen a trial under the military commissions system set up by the military and Congress.