Who’s dirtier?
In April, researchers at Purdue University released a map showing that carbon dioxide emissions are higher east of the Mississippi. 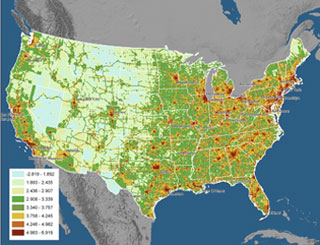 So is the U.S.’s pollution problem all the East’s fault? “Well, probably not,” says Kevin Gurney, the project’s leader. “Because of the legacy of industry, and probably the use of coal for electricity production, the Eastern half of the United States certainly shows a lot more red versus the Western half. In places that are engaged in, for example, the petroleum industry, like Texas and Oklahoma, with low population density in the counties in which this is happening, you have very high per-capita emissions. But the broad picture is actually that the West has higher per-capita emissions.”

And the West Coast may look even worse than in the map below. “The other thing to remember is that we go after where the emissions are physically coming out of the surface, which often does not so much relate to where the demand for the product that is producing the emissions is. Something like a quarter of electricity of the state of California is produced outside the state and then brought in. So you could reasonably argue that those emissions could more fairly be allocated to the people demanding the electricity.” 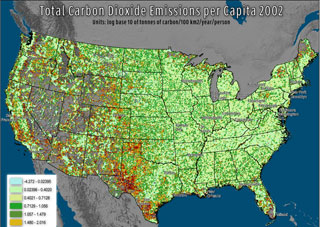 Who’s got the best resources?
Solar and biomass resource maps color the West more capable of producing renewable energy sources, but despite the assertions of some of its inhabitants, California could not, in fact, go off the old coal-reliant grid if it seceded from the union. According to Gary Schmitz, spokesman for the National Renewable Energy Lab (NREL), “It would be very tough to do given the amount of energy the state uses. The need for electricity and the need for fuels are such that there are no easy replacements quickly. California has been doing a lot, but even though nationally we added 45 percent more wind power in one year last year, wind power nationally is less than 2 percent. These things aren’t gonna happen overnight, and we need a variety of solutions.

“There are some wind resources in the Northeast. The potential offshore is significant, but that, for a variety of reasons, is a number of years off. There are also other wind resources in Eastern states that have not been fully exploited, and over time, one suspects, they will be to some degree. But one of the main things that held up a renewable portfolio standard nationally was concerns by utilities in the Southeast that they didn’t have the same kind of options that utilities elsewhere had in terms of wind resources. So there’s a variety of ways they’re looking at that, maybe to do some consortiums where, even though the resources aren’t as good in the Southeast, utilities could still benefit from electricity that was renewable elsewhere. Texas passed California a year or two ago to become the largest wind-power state, but California’s adding wind and solar, Colorado’s added significant wind—it’s happening all over the country.

Who’s got the best policies?
“California has been very progressive,” says Schmitz. “But so has New Jersey. It’s done a good job of promoting solar. So California isn’t the only state that’s done a good job in that area. A number of states around the country have adopted renewable portfolio standards, and to a large degree that’s what’s driving the deployment of solar and wind around the country.

“California was an early leader in these things, and in some ways, California dropped the ball, too. When it started a number of wind projects that built out very quickly in the ’80s, it didn’t sustain that growth until the last few years. It built some very pioneering solar projects in the Mojave Desert that were successful at the time, but its policies changed, it didn’t support them as well, and so those projects didn’t continue to grow either. I think California is back on track in terms of policies that are promoting that growth, so we’re seeing significant growth of renewable resources there, but other states are doing the same kinds of things.”

Who’s making the best effort overall?
Again, NREL’s Schmitz: “You have to look at the policies that are in place on a state-by-state basis, and what each state has done. And even the successful states each do things a little bit differently. Colorado’s renewable portfolio standard is gonna create one of the largest photovoltaic arrays in the nation. Texas has had good policies to encourage wind development, and they have tremendous wind resources. On the other hand, if you look at North and South Dakota, they have a tremendous resource. You could power the entire nation with just the wind resource in the Dakotas. That isn’t gonna happen, for a variety of reasons, but one of the reasons they haven’t even been able to capitalize on a lot of the wind potential they’ve even had to date is that we don’t have the electric transmission system that can supply the energy to where it’s needed.

“If you look at what Germany has done to promote solar energy, it’s very impressive. The policies in Germany, even though they don’t have the resource of many regions of the world, and certainly not the Southwestern United States, which has a tremendous solar resource—Germany doesn’t have that. They have the solar resource of some towns in Alaska, and yet they are the world’s leader in solar energy. You can overcome a limited resource with the right incentives if that’s what you choose to do, to some degree. There’s a variety of different policy prescriptions, but I think it’s fair to say that in the last two or three years, we’ve seen a significant increase in interest in renewable energy resources. State policies have helped, and certainly industry has responded, and even the venture capital community has responded by stimulating the markets. Policies have helped them do that.”

Source: US Department of Energy