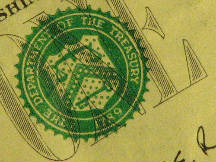 Want to see a signature worth $320 million? Click here. It belongs to Jack Gardner, an official with the now-defunct Coalition Provisional Authority, who in July 2003 authorized that amount to be transferred to the Iraqi Ministry of Finance for the payment of Iraqi salaries. There are no other records of the transfer, just Mr. Gardner’s John Hancock. Now that’s power.

The payment is but one example of the process by which U.S. dollars have disappeared without a trace into the confusion (and, yes, corruption) of Iraq reconstruction, confounding Pentagon auditors who are now trying to find out where all that money went… and what exactly, if anything, the U.S. got in return.

One such auditor is Mary L. Ugone, the Pentagon’s deputy inspector general for audit. Her testimony this morning before Rep. Henry Waxman’s (D-Calif.) Committee on Oversight and Government Reform coincided with the release of a new report from Pentagon’s Office of Inspector General, which reviewed over 180,000 payments made by the Pentagon to contractors in Iraq, Kuwait, and Egypt, totaling approximately $8.2 billion. Of that, the Pentagon admits that it cannot properly account for how $7.8 billion—”a stunning 95% failure rate in following basic accounting standards,” Waxman said in his opening statement.

The IG report details how $135 million was paid to the governments of the United Kingdom, South Korea, Poland, and others contributing troops to Iraq without any mechanism for determining how it was used. Another $1.8 billion in seized Iraqi assets were also simply given away, without any accountability. IG investigators examined 53 payment invoices. Not one made note of the money’s ultimate destination.

Together with a separate Pentagon IG report released last November, which showed the Defense Department could not account for at least $5 billion issued to Iraqi security forces (causing it to lose track of nearly all of the 13,508 rifles, machine guns, and RPGs it provided to Iraqi troops), today’s report sets the new total of Pentagon Iraq funds lost or stolen at almost $15 billion.

To date, Pentagon auditors have referred 28 cases to criminal investigators.

Photo used under a Creative Commons license from SqueakyMarmot.