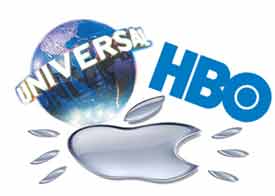 With a 3G iPhone apparently around the corner, the NY Times is reporting that Apple may be more willing than ever to negotiate with record labels in exchange for, well, more stuff you can buy on your iPhone. Apple wants more ringtones and “ringback” songs (music you hear when you call somebody, which by the way is really annoying), as well as the ability to sell songs from iTunes right over the phone network. Currently, you can shop at iTunes on an iPhone only via WiFi or connecting to a computer.

After the jump: how much would you pay for Colbie Caillat?

Bargaining has been a mixed bag for Apple lately; while record labels seemingly lost the battle for variable song pricing (all tracks remain 99 cents), TV networks have been more aggressive: NBC famously dumped iTunes to go on dates with Amazon and Fox, and HBO recently broke iTunes’ $1.99-per-show barrier, with episodes of “Rome,” “Deadwood” and “The Sopranos” going for $2.99 each. Jeez, a couple of those every month and you might as well just get HBO on that box thing across from your couch, what was it called again?

Record labels’ demands for variable pricing seem more bothersome, however, since they hope to up the price of popular recordings (that Rihanna track will be $34 please) while clearing out the MP3 warehouse by lowering prices on forgotten hits of yesteryear (get your Hawkwind tracks here, 10 for a dollar). Apple’s been right to resist that: the user-friendly simplicity of “a dollar per song” is part of what makes iTunes so popular. Universal, specifically, is lobbying for a subscription service, which seems even worse: imagine your iPhone coming locked in with a year of whatever crap Universal Music puts out. Now, if Apple could arrange a Merge subscription, maybe we’d have something there.