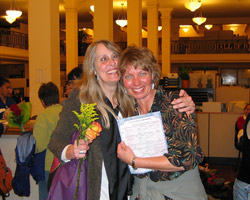 Most people aren’t alive for their parents’ wedding day, but I was. The date was February 16, 2004, four days after Mayor Gavin Newsom announced that San Francisco would issue marriage certificates to same-sex couples. My parents had been together for 24 years at that point, so it was natural for them to question the value of a piece of paper when the test of time had already validated their relationship. But when the right to marry presented itself four years ago, they jumped on it.

With their friends Frank and John, my moms drove two hours from their home in Monterey to the majestic steps of San Francisco’s city hall. That first day, the line of elated couples waiting to be married wrapped around the building, more couples than city officials had time to handle, and so they came back at 6am the next day and stood in line for 13 hours. Cars drove by honking in support, restaurants brought beverages and food to the waiting masses, strangers dropped off flowers and balloons, and cheers erupted each time a set of newlyweds came through city hall’s golden doors. And then, what began as a historic event televised around the world became a wholly personal moment for my family. I listened on the phone from Atlanta as my moms exchanged their vows. (Because we’d had no notice of Mayor Newsom’s bold move and because no one knew how long the opportunity would last, I didn’t have enough time to fly home for the occasion.)

My moms came to visit me a few weeks later for what they dubbed as their “honeymoon.” They were like two teenagers in love for the first time. And let me tell you, they made sure everyone knew it was their honeymoon: They told our waiters, my co-workers, and anyone else who would listen. The official acknowledgment given to them by the city of San Francisco was more meaningful than they or I had ever imagined it would be.

This morning, when the California Supreme Court handed down its decision to overturn a 2000 ballot measure that banned gay marriage, I called my moms to deliver the good news. They were thrilled, and immediately started planning their next wedding ceremony—which they’ll need to have, because a court in August 2004 nullified their first marriage. This time, they said, I would be there to give them both away.

For a few hours after the news broke, the Mother Jones’ staff was abuzz with comments. Then came an email from one editor: “Great news, but you know this’ll get conservatives to the polls if McCain doesn’t.” It reminded me of when one of my mothers woke up to the Monterey Herald‘s front page headline just after the 2004 presidential elections: “Gay Marriage Lost Election for Democrats”. She was devastated. As if Bush’s reelection wasn’t bad enough, now she felt betrayed by her party. It’s ironic that today’s decision comes six months before Californians will vote for a new president, and also on a second gay marriage ban. The initiative, which would amend California’s Constitution to disallow same-sex marriage, has received 1.1 million signatures—all but guaranteeing it a spot on November’s ballot. The similar 2000 measure, which the court ruled unconstitutional today, was approved by 61% of the popular vote.

Some say gay marriage will again be a wedge issue that galvanizes the conservative base this fall, while others are skeptical that it will have the same traction it did four years ago. Either way, when it comes down to it, equal rights should always trump politics in my book. Today’s California Supreme Court decision will be on the books far longer than McCain, Clinton, or Obama will be president. And for my family, one candidate’s campaign promises don’t come close to matching the promise encapsulated in the court’s words: The “right of two adults who share a loving relationship to join together to establish an officially recognized family of their own—and, if the couple chooses, to raise children within that family—constitutes a vitally important attribute of the fundamental interest in liberty and personal autonomy that the California Constitution secures to all persons for the benefit of both the individual and society.”