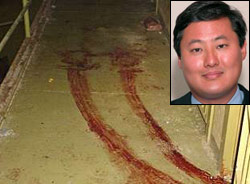 The Yoo memo that is making headlines today isn’t anything new. We’ve known the content of this “torture memo” for quite some time. Sent to the Pentagon by John Yoo, then a deputy in the DOJ’s Office of Legal Counsel, in 2003, the memo provided the legal foundation for the DOD’s “aggressive interrogations,” including waterboarding. The primary justification was simple: If the president wants to do something in a war, it’s legal. Or, as the Washington Post puts it today in a front page article, the memo “contends that numerous laws and treaties forbidding torture or cruel treatment should not apply to U.S. interrogations in foreign lands because of the president’s inherent wartime powers.”

The secondary justifications aren’t much better. If an American serviceman hurt a detainee in an interrogation, he or she could argue a “national and international version of the right to self-defense,” because the interrogation was intended to procure information that would prevent further attacks on America. The memo ruled with completely confidence that Congress has no jurisdiction over interrogations and that the Geneva Conventions (and all other treaties governing behavior during wartime) are irrelevant.

The reason the memo is in the news now is because it has finally been declassified and can be read in full. (You can view it at the Post‘s website.)

Marty Lederman, a former lawyer with the Office of Legal Counsel, has read it and says it basically authorizes “a law-free zone.” His thoughts are here. Emily Bazelon of Slate has done the same and finds the “air of uttery certainty” breathtaking. Kevin Drum notes that “there was nothing in it that compromised national security either then or now. The only thing it compromised was the president’s desire not to have to defend his own policies.”

At this point, there’s just no outrage left. Everything we learn about the administration now is simply part of a massive educational process about how not to run the executive branch.