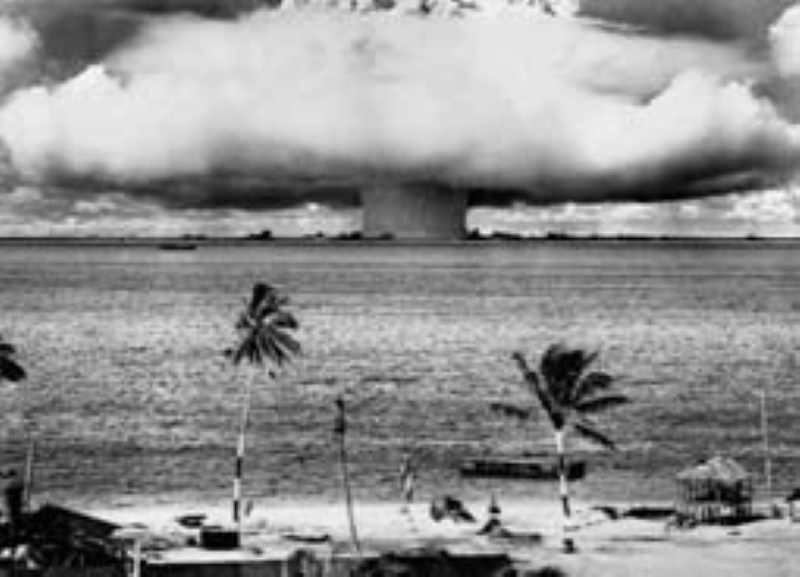 Fifty years ago the last atomic bomb test shook the Pacific’s Bikini Atoll. Now corals are flourishing here again—though with 42 fewer species than prior to the bomb blasts. At least 28 of the missing corals appear to be genuine local extinctions, victims of the 23 bombs exploded at Bikini between 1946 and 1958. An international team has been surveying biodiversity at the atoll, including diving into the 1954 Bravo Crater, site of the most powerful American atomic bomb ever exploded (15 megatons, 1,000 times bigger than Hiroshima). The Bravo bomb vaporized three islands, raised water temperatures to 100,00 degrees F, shook islands 125 miles away and left a crater 1.25 miles wide and 240 feet deep.

“The missing corals are fragile lagoonal specialists—slender branching or leafy forms that you only find in the sheltered waters of a lagoon,” says Zoe Richards of the Australian Research Council Centre of Excellence for Coral Reef Studies and James Cook University. Bikini Atoll has been unpopulated and largely unvisited in the decades since the blasts, and reveals how in the absence of more modern stressors like overfishing and overpopulation some corals have the capacity to recover from vast upheavals. Because of its incredible history and current undisturbed character, Bikini Atoll is now the focus of an ongoing effort to list the northern Marshall Island atolls as a World Heritage Site.

Hope the US is spearheading and funding that effort. Seems the least we can do.

Julia Whitty is Mother Jones’ environmental correspondent, lecturer, and 2008 winner of the Kiriyama Prize and the John Burroughs Medal Award. You can read from her new book, The Fragile Edge, and other writings, here.