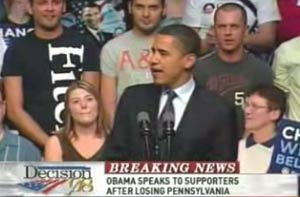 Both Towleroad and Gawker noticed this too: last night, during Barack Obama’s Pennsylvania concession speech (in Indiana, naturally), there was a bit of surprising, shall we say, product placement. Three fine-looking young collegiate bros, placed directly behind the candidate, each wearing a clearly-branded Abercrombie & Fitch T-shirt. First of all, what are the chances? I can imagine two frat boys leaving the frat house with their A&F shirts, but once a third joins them, you’d think one of them would go back and change. On the other hand, it seems unlikely that this is, as Gawker suggests, “a plot by the Obama campaign to win back the gay community, which has something of a taste for the youth clothing retailer and, especially, its catalogs, but whose vote is basically owned by Hillary Clinton.” So true, and oh, the shame. Don’t let anybody tell you the gays always have good taste.

So what’s going on? Did A&F dispatch a trifecta of models to the arena, hoping for some air time? Or is this an inside deal, with the Obama campaign getting a cut (and maybe some boxer briefs)? If so, you’d think they’d be more about United Colors of Benetton, especially since A&F are well known for, er, marketing group sex to teens. Whose shirts can we expect to show up behind Hillary during her North Carolina concession speech, Polo by Ralph Lauren? Well, I don’t care if these speeches turn into runway shows, I just want this thing over.

After the jump, watch the Obama speech and amuse yourself by imagining what each of our Abercrombie boys are thinking at any given moment.