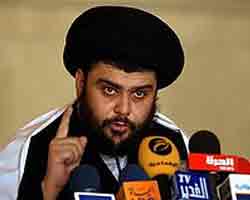 Following a model first established by Lebanon’s Hezbollah, Muqtada al-Sadr’s Mahdi Army has become the leading provider of humanitarian assistance to internally displaced Iraqis—in the process winning support from local populations and drawing a steady stream of new recruits. According to a new report (.pdf) from Refugees International, a Washington-based advocacy group, the Iraqi government’s failure to respond to the needs of an estimated 2.7 million internal refugees has provided militias with a valuable propaganda tool and a way to strengthen their respective bases of support.

Both Shiite and Sunni militias have gotten into the humanitarian game, but Sadr’s organization, under the auspices of local “Martyr Sadr” offices located in cities throughout Iraq, seems to have become the most predominant and, indeed, the most vital to the welfare of thousands of displaced persons.

According to the report:

Because of the Government of Iraq’s inability to respond to the needs of Iraqis, and the UN’s slowness in addressing the humanitarian crisis in Iraq, a vacuum was created that is being filled by non-state actors. The fragmentation of Iraq and the eradication of any form of real government benefit militias and individual political movements that provide assistance as an integral part of their programs. As a result, non-state actors play a central role in providing assistance to families throughout Iraq. The largest “humanitarian” organization in Iraq is the Sadrist movement affiliated with Muqtada al Sadr, the anti-American Shiite cleric, and his local Offices of the Martyr Sadr, which exist throughout Iraq—from Kirkuk to Baghdad to Basra. Operated on a model similar to Lebanese Hezbollah, his sustainable program provides shelter, food and non-food items to hundreds of thousands of Shiites in Iraq.

Electricity is an essential service that ends up being provided by armed groups…. the Mahdi Army—Muqtada al Sadr’s armed group—also “resettles” displaced Iraqis free of charge in homes that belonged to Sunnis. It provides stipends, food, heating oil, cooking oil and other non-food items to supplement the Public Distribution System (PDS) rations which are still virtually impossible to transfer after displaced Iraqis have moved to a new neighborhood, though it is easier for Shiites to do so.

Refugees International concludes that armed militias now have “a quasi-monopoly in the large-scale provision of assistance in Iraq” and warns that such groups are using their good works to recruit an “increasing number” of civilians into their ranks. Put simply, the problem is that, at least when it comes to caring for the population’s essential needs, “the government does not have any credibility left with Iraqis.”