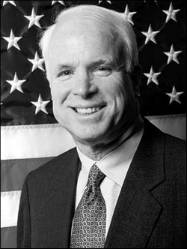 John McCain, a longtime crusader against the corrupting influence of lobbyists in American politics, certainly has not shunned their help when it comes to his run for the presidency. The deeper into the campaign season we get, the more we seem to be learning about his not insignificant connections to the very influence peddlers he’s so often railed against. Today, we get another piece of the puzzle, thanks to Sam Stein at the Huffington Post, who reports that Charlie Black, one of McCain’s chief political strategists and himself a longtime Washington lobbyist, is the author of a pair of letters to federal officials in defense of Wayne Drizin, “a convicted felon, disbarred lawyer, and failed brothel owner with long business connections to the controversial Iraqi exile Ahmad Chalabi.”

The letters, obtained by The Huffington Post, were sent to a U.S. district court judge and the U.S. Justice Department’s inspector general’s office. They are scrupulously detailed and, at times, personal notes, praising Drizin and alleging that a conspiracy of zealous federal investigators was to blame for his legal woes.

At the time, Black was a consultant for e-Smart Technologies, a biometric security technology company that Drizin helped start. Drizin was mired in legal battles over his past convictions. The Republican insider and lobbying powerhouse went to bat on the founder’s behalf.

Black’s letters, however, were ultimately an exercise in poor judgment. After Drizin had a falling out with e-Smart, Black wrote that same judge a year later asking that his previous advocacy be expunged from the judicial record, an unusual move for such a high-powered figure.

But the episode, mainly because of Black’s close proximity to McCain, remains politically relevant. In a separate interview on the matter with Aram Roston, author of “The Man Who Pushed America To War,” Black claimed he had not realized the extent of Drizin’s controversial past — an assertion Drizin’s lawyer denies.

To critics, Black’s actions show the extreme lengths he would go for a business associate — including calling on the Justice Department to investigate a U.S. attorney for framing Drizin — only to reverse course as soon as the business relationship turned sour.

Moreover, the episode draws a spotlight back to Black’s history of associations with questionable characters and firms, including the private contractor Blackwater USA and even Drizin’s old business partner, Ahmad Chalabi.