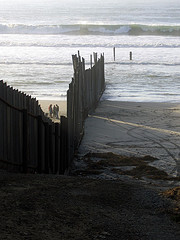 A month ago, Julia Whitty wrote that the government might be moving towards a saner approach to the border fence—environmentally speaking, anyway. Yesterday’s news was not so sunny (and not so sane): the Department of Homeland Security announced that it will waive a host of federal environmental regulations in order to complete nearly 700 miles of border fence by the end of the year.

DHS insists that “the department remains deeply committed to environmental responsibility, and will continue to work closely with the Department of Interior and other federal and state resources management agencies to ensure impacts to the environment, wildlife, and cultural and historic artifacts are analyzed and minimized.” Hard to see how they can possibly argue this when they plan to ignore the National Environmental Policy Act, the Endangered Species Act, the Clean Water Act, the National Historic Preservation Act, the Migratory Bird Treaty Act, the Safe Drinking Water Act, the Clean Air Act, and 28 other pieces of legislation whose scope includes everything from desert protection to Native American rights.

I wish I could say that this will be a tough sell, especially in those border communities already chafing at the government’s heavy hand. But, sadly, it won’t, because they don’t have to sell it at all. The Department’s authority comes directly from Congress, which amended a section of a 1996 law to allow the head of Homeland Security to waive regulations at his sole discretion. In short, legislators are so determined to build a fence that they’ll ignore the ongoing, unified opposition of local leaders and environmental groups, and flout the law in order to enforce it.

Update: In the “nothing money can’t buy” department, The Texas Observer reports that the fence will skip property owned by a major Bush donor.