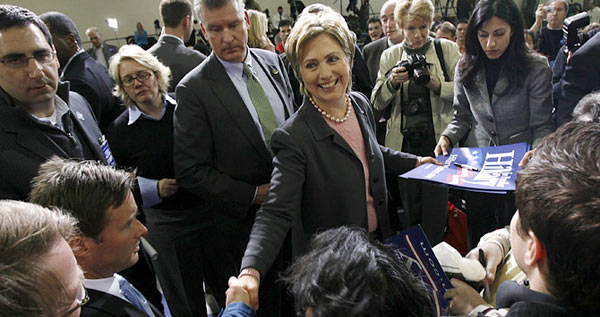 MIFFLINTOWN, PA – Hillary Clinton spent a rainy Sunday afternoon in Johnstown, Pennsylvania, the sort of small town that has recently been at the center of her race against Barack Obama for the Democratic presidential nomination.

In a mirror of the Ohio primary, in which Obama took heat for the Goolsbee/NAFTA affair right before election day, Obama has spent the week before Tuesday’s Pennsylvania vote explaining his comment that in “a lot of small towns in the Midwest,” people are “bitter” and “cling to guns or religion.” Clinton has sought to portray Obama as out-of-touch and to portray herself of the true champion of small town values. She entered Greater Johnstown Senior High School (home of the 2007 Laurel Highlands Section 2 softball champions) to the sounds of John Mellencamp’s folk rock tune “This Is Our Country.” And if that wasn’t on-the-nose enough for the thousand or so attendees, she exited to Mellencamp’s “Small Town.”

But aside from some very subtle references (Clinton said she wanted to be the president of “every city, every town, every village”), the attack de jour was elsewhere.

Governor Ed Rendell, a stalwart Clinton supporter who spoke before the Senator, tipped off the crowd when he paraphrased this statement Senator Obama made earlier in the day:

The critique was that Obama was willing to give an inch — the Democratic talking point of the campaign is that McCain is running for a third Bush term, and saying otherwise suggests that the speaker is either soft or naïve.

Clinton used the opportunity to hammer Obama and McCain both, saying:

“Sen. McCain thinks it is okay to keep our troops in Iraq for the next 100 years. Is that better than George Bush?

“Sen. McCain will continue the failed economic policies of George Bush that have brought us deficit and increasing debt. Is that better than George Bush?

“Sen. McCain does not have a health care plan that will cover every American. In fact, we will have more and more uninsured Americans. Is that better than George Bush?

“Sen. McCain has no plans to end the housing foreclosure crisis or cut the cost of gas at the pump. Is that better than George Bush?

This last bit was pure political theater, of course. No one reasonably expects Obama to “cheer on” John McCain when he is running against him in the general election. It was perhaps a sign that “bitter”-gate had run its course or not been effective at all (polls show Obama’s three to seven point deficit hasn’t really moved in the last week). Or perhaps it was a one-day shot at Obama, simply more grist for the mill.

Other than that, Clinton’s stump speech could have been out of Iowa. She addressed the bread and butter topics that every Democrat has discussed for months — gas prices, health care, the war, veterans’ benefits, college affordability — and used the oldies but goodies against Obama. Real change won’t come by hoping for it, she said, or making speeches about it. It comes only from experience, solutions, and a willingness to take on the tough problems. At an event later in the day at Penn State, Clinton said that when voters make up their minds they need to “get beyond the generalities, get beyond the speeches… you’re electing a president to solve problems, not to give speeches.” By now, this is familiar territory for anyone who has paid even cursory attention to the presidential primary.

Most of the people in attendance were committed Clinton supporters who didn’t need the events of the last ten days to tell them who to vote for. Mary Jane Seth, a homemaker, said she has been waiting for a chance to vote for Clinton since her husband’s presidency. “She knows her business. She’s capable, she’s confident, she’s intelligent. She’s ready and able to do the job.” But Seth added that she didn’t care about Obama’s comments. “Everyone makes stupid comments,” she said. “One or two stupid comments does not the person make. I do not hold that against him.” Seth said “bitter”-gate was mostly a creation of the media.

That sentiment was echoed by others. Joe Skrinjorich, a trucker and fan of Senator Clinton’s health care plan, said he had heard the comments but wasn’t swayed by them. “The way I see it, it’s just the way you take it. It could have been taken out of context,” he said. “Even though I live in a small, rural town it doesn’t bother me.”

Multiple people — all white, all working class — were hesitant to respond when asked if they would support Obama if he won the nomination, an indication that the Illinois Senator will have some work to do to win over Clinton’s base should he take the nomination. One woman, reflecting the feeling of others, said, “I won’t vote for a Republican. But I might sit it out.”

Considering the state of the race, however, none of this may matter. A close win for Clinton in Pennsylvania puts her in a deeper hole than she is already in, because the delegate gap between her and Obama will remain basically the same and she will have fewer states and thus fewer outstanding delegates with which to make it up. It’s possible that the song that fits the moment best is one that blared over the loudspeakers shortly before Clinton took the state: the ominous tones of Journey’s “Don’t Stop Believing,” the last thing Mitt Romney played before he lost Iowa.