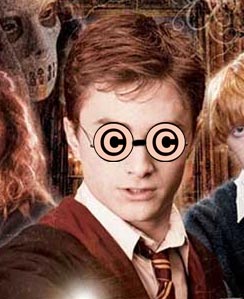 It’s the epic struggle of our time: Scrappy internet fair-use exploiters vs. authors and their corporate overlords. But this time, the battle has, you know, wizards and muggles or whatever. Harry Potter author J. K. Rowling appeared in a New York courtroom last week to defend copyright infringement charges against Vander Ark, the creator of the unauthorized Harry Potter Lexicon web site, after plans were revealed for a book version. While some commenters attacked the site as “something parasitic on years of hard work by Rowling,” the potential publisher of the Lexicon pointed out that giving authors too much control over “books about them” is dangerous:

We would have to get approval before we could write or publish on people’s work. They would control critical commentary on their work, at any time, whether it is our kind of book or an Associated Press article. It would create total chaos in the area of critical commentary. Frankly, I don’t think that would be good for anyone, even the authors themselves.

Rowling herself has appeared somewhat self-contradictory on the matter, first complimenting Ark’s work and insisting she “never ever once wanted to stop Mr. Vander Ark from doing his own guide,” but during the trial she came close to tears, describing the book version of the Lexicon as “wholesale theft.”

To say that the Internet has changed the notion of copyright is like saying internal combustion changed travel. For sure, AP says, the web is “awash with fan-produced material that could be the subject of a copyright fight, from remixed pop songs to new fiction based on existing characters.” Hmm, remixed pop songs? What do they mean? Jeez, even the link to that news story (filtered through Google) brings up the issue: Does Google’s news roundup violate the copyright of the original sources? It’s all so confusing! Doomsayers predict a future without art, since nobody will make stuff if they can’t be compensated: “Not only will hordes of people lose their jobs,” insists a blogger at the UK Guardian,
“but our next Burt Bacharach or Lamont Dozier won’t write their masterpiece, being too tired after working double shifts at Tesco or TGI Friday’s.” Lamont who now?

Clearly I’m a bit biased, but this all seems a bit hysterical to me. Should the estate of, say, architect Gregory Johnson, get paid every time the Empire State Building appears in a film? What if someone builds a copy in Vegas? And what about all-powerful Google sending vans with cameras down your street and taking pictures of your house? While you might be perturbed if you were busted going into a sex shop, should you be paid for the use of the images? Once something is created, to a certain extent it becomes part of the landscape, cultural or otherwise. Of course, when a digital copy of a thing is indistinguishable from the thing, that’s when it gets complicated, and the Harry Potter trial appears to be an attempt to figure out just how distinguishable the Lexicon really is. But it’s hard to imagine how even a book version of the Lexicon could be any different, qualitatively, from a critical review of Rowling’s oeuvre. And criticism, my friends, is something I will always use my magical powers in defense of, no matter how many evil wizards try and stop me.