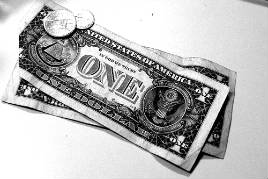 As many of you scramble to get your taxes done before tomorrow’s deadline, Citizens for Tax Justice, a Washington-based advocacy group, has released a new report showing just how much love the Bush administration has shown to the richest one percent of Americans… literally at the expense of the rest of us. Not that we didn’t already know this, of course, but somehow seeing it all laid out in black and white brings it home all the more clearly.

According to the report, in 2010, when all of the Bush tax cuts will finally have taken effect, the richest one percent of American families—those earning $1.6 million annually—will receive, on average, a $92,000 tax cut. As a share of the population, these families will account for an estimated 53 percent of all tax relief, while the poorest 60 percent will be on the receiving end of just 12-15 percent of tax cuts.

Just what does it take to belong to the richest one percent? Money, of course, and lots of it. According to the report:

In 2008 the best-off one percent will have an estimated average income of almost $1.5 million each. Just to get into this elite group requires an income greater than $462,000. If all of that came from wages, then for single people it would take an average wage of $224 an hour to make it into the top one percent, and $722 an hour to become an average member.

Yet, however unlikely it may be, membership in this elite club is something many Americans believe to be a realistic prospect. According to a 2000 opinion poll, some 19 percent of us believed we were already members of the top one percent, while another 20 percent said they expected to get there someday. Never let it be said that Americans lack optimism.

But back to the Bush tax cuts… the fact is that nothing in life is free, and as the national debt continues to soar, so does the certainty of troubled times ahead as we struggle to pay it down.

Even if the Bush tax cuts are allowed to expire at the end of 2010, as they are schedule to do under current law, interest payments would continue to cost us about $1.5 trillion during the 2011-2020 period. (This is not included in the $5 trillion cost of extending the tax cuts.

These costs should not be written off as some abstract or distant problem. The national debt must be paid off eventually, either in the form of increased taxes or cuts in public services that Americans rely on.

And, finally, to put the tax cuts offered to the richest one percent in some perspective, the report compares them to the annual budget allocations for various federal agencies:

Photo used under a Creative Commons license from Monochrome.