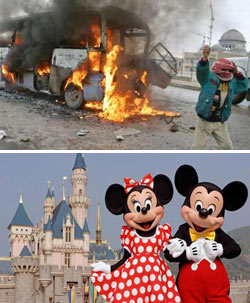 Satire becomes reality. In the preview for “War, Inc.” that Bruce posted below, private contractor John Cusack executes a war for the American government and then watches bewilderedly as a hip-hop star and her entourage invade the country right behind him. Soon English-language billboards and bumper stickers are everywhere.

That’s ridiculous, right? An over-the-top display of how the encroachment of American culture and capitalism works. Leftist Hollywood hysteria.

[Llewellyn] Werner, chairman of C3, a Los Angeles-based holding company for private equity firms, is pouring millions of dollars into developing the Baghdad Zoo and Entertainment Experience, a massive American-style amusement park that will feature a skateboard park, rides, a concert theatre and a museum. It is being designed by the firm that developed Disneyland. “The people need this kind of positive influence. It’s going to have a huge psychological impact,” Mr Werner said.

The 50-acre (20 hectare) swath of land sits adjacent to the Green Zone and encompasses Baghdad’s existing zoo, which was looted, left without power and abandoned after the American-led invasion in 2003…

Success seems improbable at best. Resentment is sure to be created. How about some of the naivete and over-confidence that got us into so much trouble with this war in the first place? Do you have any of that for us, Mr. Werner?

Mr Werner, who has been sold a 50-year lease on the site by the Mayor of Baghdad for an undisclosed sum, says that the time is ripe for the amusement park. “I think people will embrace it. They’ll see it as an opportunity for their children regardless if they’re Shia or Sunni. They’ll say their kids deserve a place to play and they’ll leave it alone.”

Sure. A massive Disneyland-style amusement park, operated for American profit, plunked in the middle of Baghdad — that won’t be a target for hostilities. Not at all.

The project will cost $500 million (£250 million) and will be managed by Iraqis. Under the terms of the lease, Mr Werner will retain exclusive rights to housing and hotel developments, which he says will be both culturally sensitive and enormously profitable. “I wouldn’t be doing this if I wasn’t making money,” he said. “I also have this wonderful sense that we’re doing the right thing – we’re going to employ thousands of Iraqis. But mostly everything here is for profit.”

A $1 million skateboard park, the first phase of the development, will open in July.

I love the bolded quote. Am I being too cynical if I note that this is the logical conclusion of any American occupation? For all of my harrumphing, this was essentially inevitable.