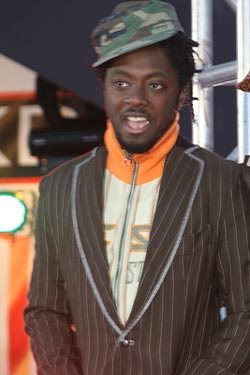 The generically-named conservative site HumanEvents.com (not to be confused with RobotEvents.com) has posted a pretty hilarious article which lists Barack Obama’s supporters in the hip-hop world, and then quotes some profanity-featuring lines from their songs. They claim his “rapper” ties are even worse than the Jeremiah Wright scandal:

Although the media has finally exposed Barack Obama’s ties to the unhinged pastor his support from rappers who propagate equally pernicious nonsense has gone almost entirely unnoticed. Rappers are gaga over Obama. The superstar Jay-Z, who raps about “b——,” “hoes” and “n—–,” even urged voters to support Obama in a robo-call for the March 4 Ohio primary and caucus. The equally foul-mouthed rapper Will.I.am, whose hit songs include “I love my B—-,” has hyped Obama in two widely-viewed videos posted on YouTube.

Okay, seriously, trying to portray Will.I.am as a dangerous, profanity-spewing thug is like calling Carrie Underwood a communist. There’s also this most excellent line: “His complicity with rappers dates back to at least 2006.” Well, that’s basically when hip-hop started, right?

On the other hand, JudicialWatch (“Because No One is Above the Law”) is calling for the FEC to investigate Elton John’s performance at an April 9 fundraiser for Hillary Clinton, because he’s a dirty foreigner:

“Recent news reports suggest that Hillary Clinton and Hillary Clinton for President have accepted an in-kind contribution from a foreign national, Sir Elton John, in contravention of federal electon laws,” Judicial Watch President Tom Fitton stated in an April 14 letter to the Office of the General Counsel for the FEC. “On behalf of Judicial Watch and its supporters, I hereby request that the FEC investigate this matter.”

This wouldn’t have anything to do with his being a gay foreigner, and one who dares own a photograph by Nan Goldin, would it? Of course, McCain’s not immune to the questionable-endorsement syndrome, either: Has anybody ever watched The Hills? That show does more damage to America than a million foreign, gay, profanity-spewing gansta rappers ever could.