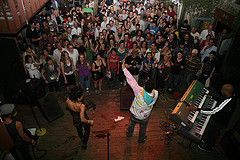 I haven’t slept much so far at SXSW—or, “South By,” if you’re nasty. There is just an ungodly amount of things to see, hear, and do here. It’s over-saturating even my high tolerance for over-stimulus. And I mean that in the best possible way.

So by the end of Day 1 here, I learned that the key to success is to chill. Trying to run around and do everything just ain’t gonna happen. Having a plan with room for deviation is the way to go. With that newfound wisdom, Day 2 here was a good one:

The members of Yo La Tengo were kind enough to explain a little bit of what it’s like to be in what one writer calls one of the “most important, unique, and beloved bands in American rock.” Look for my Q&A with them here soon, but here’s a hint: they don’t think too much about their longevity (they formed in 84), and they don’t think much about the “indie” music scene. Bassist James McNew put it this way: “I don’t think we pushed through [the indie music boom of the 90s] as much as we sort of passively walked through it.” Yo La Tengo = smart, funny guys.

I walked past an outdoor stage where singer-songwriter Billy Bragg was performing. Having played four sets of music the previous day, his voice was shot and he was struggling to hit high notes. The crowd cheered regardless, someone brought him some herbal tea, and the show went on. Having seen Bragg perform a much softer, more professional (less interesting) set at the Austin convention center the day before, I wasn’t all that pumped to see him again, but this set, sans high notes, was honest, real, scruffy, and fun. Another great SXSW moment where perfection is shunned and true spontaneity on stage is widely appreciated by the masses.

Next up: a packed-house discussion panel on what it means to blog and be a blogger in 2008. A great pool of panelists probably could have been challenged more with some more poignant questions, but I left feeling like blogs get way too much attention and everyone and their grandmother has one so who cares.

I decided to pick up my mood by hanging out with a large crew of Republican lobbyists and senate/congressional aids, bankers, and what not at a backyard bar near Austin’s capitol building. The Bud Lite flowed heavily while bands like Fastball and The Shivers played. Bonus points to members of the Shivers, who threw caution to the wind and danced on tables. One married couple left early to attend the mutton-busting portion of a nearby rodeo, and I was really tempted to go with them.

Nighttime rolled around and I hung out with Dave Wakeling, founder of one of the seminal English ska bands of the 80s, the English Beat (and later General Public). He was arguably more excited to talk about Barack Obama than he was the English ska movement. More on Wakeling (and his thoughts on racism, the environment, and 80s music) later.

At a bar adorned with huge busts of deer, rams, and buffalo (“We don’t even have any of those animals in Texas,” one local said), I got into a huge political debate with some locals and one fellow San Franciscan. Summary of opinions expressed: Republicans will vote for Obama over McCain, Ron Paul has great ideas, Ralph Nader is an idiot, we are never leaving Iraq, Jimmy Carter was a wuss, and Ronald Reagan resurrected the economy.

Five blocks away, I saw the New York band Pistolera completely rip through a set of revved-up songs that mix Cumbia, rock, and immigration/border patrol politics. One of my favorite sets of the week. Check back for a full Q&A soon.

Four blocks in another direction, I watched Denver gypsy band DeVotchka play through one of the more romantic, vulnerable, and hauntingly melodic sets I’ve seen a band pull off in a long time. With a sousaphone, strings, upright bass, accordian, trumpet, and guitar, they (hopefully) reminded the 300-or more people there that pop song formulas can and should be challenged. A Q&A is soon to come.

Still with me?! I stopped by an outdoor courtyard to see Bay Area rapper Lyrics Born perform, and the set was so funking funky, so dripping and oozing with funky funk, that I was completely funked out after 20 minutes. Lyrics Born is Funky McFunkerson.

Before completely passing out, I caught the last couple of songs from the English Beat. Wakeling’s the only original member still playing, but I have to say it was pretty cool; that is, if you ever thought songs like “Sooner or Later” or “I Confess” were cool. People were bouncing all over the place right up through the last song. If only (former band mate) Ranking Roger could have been there; although he’s busy playing gigs in the UK as the English Beat. Yep, both guys still use the band name on both sides of the pond. Weird.