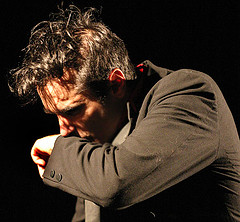 So here’s the catch about covering the music portion of SXSW: after a day or two of playing as many as four sets a day and doing back-to-back interviews, musicians are tired of playing music, and even more tired of talking about it. Sometimes they’re hung over, or tired, hungry, annoyed, grouchy, or just a little disinterested. Can’t say I blame them; although they knew what they were getting into when they showed up, no?

The up-side is that when you tell someone you’re interviewing them for Mother Jones, suddenly their face lights up and they say screw jabbering about music, let’s talk politics. It’s happened consistently while here in Austin. So, here’s a brief glimpse at what’s on the minds of musicians at SXSW in 2008:

“I basically stopped reading all newspapers—except the sports sections— in early 2003. I just don’t really trust anyone. They’re all kind of crazy,” James McNew, bassist, Yo La Tengo.

“Obama came on the tele, and I was crying out, punching the air, saying ‘Yes, Yes!’,” Dave Wakeling, founder, the English Beat.

“Let’s beach an aircraft carrier, and give that money we were spending to keep it afloat to some schools. We could pay for f!*king healthcare, but we pay for defense. Maybe people will finally f!*king vote in 08. But it’s only March, and it’s more bulls!*t every day,” Nick Urata, founder/singer/guitarist, DeVotchka.

“Democracy is a mass movement. If we don’t take a stand, and take democracy back, it will be taken from us. We need a major movement, and a plan to grow,” Richard Bowden, founder, Million Musicians March, Austin.