2 in 3 American households have pets; 1 in 3 has children.

In 2006, Americans spent nearly $45 billion on their pets. The pet industry is growing nearly twice as fast as the economy. 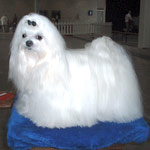 When she died last year, Leona Helmsley left $12 million to her Maltese, Trouble, and nothing to two of her grandkids and her 12 great-grandkids. With annual expenses of $300,000 and a life expectancy of 15 years, the 8-year-old lucky dog could leave behind more than $9 million.

Industry analysts say the “recession-resistant” boom is fueled by empty nesters and singles who are putting off marriage and kids.

1/3 of women surveyed by the American Kennel Club agreed with the statement “If my dog was a man, he’d be my boyfriend!”

69% of owners let their pets sleep in their bed. Sleep-clinic patients who own pets report that 21% of dogs and 7% of cats snore.

PetSmart CEO Philip Francis and his wife share a bed with their pooch, Bit O’ Honey.

People can match photos of purebred dogs with photos of their masters 64% of the time.

1/3 of pet owners give their pets birthday presents; 2/3 give holiday gifts.

In her online diary, “Confessions from a Canine Drama Queen,” Tori Spelling’s pug, Mimi La Rue, writes, “we might be moving back to LA—the city of superficiality and where dogs are merely accessories for spoiled celebrities who want their picture on the cover of trashy tabloids!”

Pfizer claims that up to 40% of American dogs—17 million in all—are overweight.

Oprah has denied rumors that she set aside a $30 million bequest for her five dogs.

Mr. Winkle, a mutt who has appeared on Sex and the City and the Today show, has gotten 74 million hits on his website and receives up to 50 emails a day.

More than 360,000 dogs are registered on the social-networking site Dogster.com. More than 150,000 cats have pages on Catster.com.

Pamela Anderson’s Chihuahua, Luca, “married” a golden retriever in a ceremony on the beach in Malibu in August 2005. 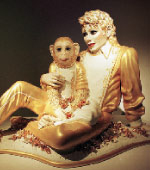 The number of animal trainers has nearly tripled since 2000. Says the founder of the Association of Pet Dog Trainers, “the job is 90% people training.”

A bipolar Missouri man has a registered “service parrot” named Sadie. “When I start having anxiety attacks,” he says, “she’ll say, ‘Jim, I love you.'”

The iPond, a portable audio speaker combined with a 22-ounce aquarium, sparked outrage when it hit shelves in Australia last year. It is nearly 17 times smaller than the recommended tank size for a single small fish. 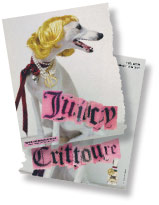 Juicy Couture’s Dog Pawfum, “the first fragrance for the decadent dog,” sells for $60 an ounce. A dog’s sense of smell is more than 100 times stronger than a human’s.

Last December, a Kansas City man pleaded guilty to planning to smoke the dried venom of a Sonoran Desert toad to get high.

“Godzilla” is the most popular name for female pet reptiles. For males, it’s “Buddy.”

There are 5,000 tigers in captivity in the U.S.—the same number as are in the wild worldwide.

A New Yorker kept a Siberian tiger in his apartment for nearly two years before authorities took it away in 2003. “I miss him a lot,” lamented the owner. “He’s like my brother, my best friend, my only friend, really.”

Despite being mauled by his white tiger Montecore in 2003, Roy Horn of Siegfried & Roy visits him every week and calls him “my lifesaver.”

See the sources for this story here.