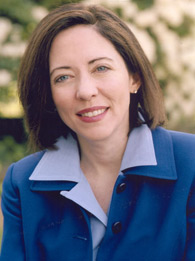 Washington Senator Maria Cantwell, a Clinton supporter, has announced that she will cast her superdelegate vote for whichever candidate wins the pledged delegate count. From The Columbian, via The Stranger:

But in an interview with The Columbian’s editorial board Monday, she said the candidate with the most pledged delegates at the end of the primary season in late June will have the strongest claim to the party’s presidential nomination.

“I definitely don’t want the superdelegates to be the deciding factor,” she said.

“If we have a candidate who has the most delegates and the most states,” the Democratic party should come together around that candidate, Cantwell said. The pledged delegate count will be the most important factor, she said, because that is the basis of the nominating process….

Cantwell said she wouldn’t object to a primary contest that went into the summer if it focused on the issues facing the nation, but added, “We wouldn’t want to tear apart the party.”

“I think it’s important that we let it play out in June,” she said. At that point, she said, “I’d be urging my party to make a decision.”

There may be some around here who disagree with me, and if so I welcome them to make their case, but I think this is how superdelegates ought to act. (Of course, the fact that Obama won Cantwell’s state by 27 points probably has something to do with her decision…)