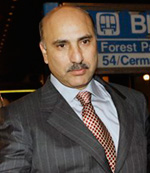 In emails, on conference calls with reporters, on the campaign trail, Hillary Clinton and her aides have repeatedly raised the issue of Barack Obama’s relationship with Tony Rezko, a developer now on trial on corruption charges. Clinton aides have said over and over that there are “unanswered questions” about this relationship and have encouraged reporters to dig, dig, dig (even though several reporters have already done so). Clinton referred to Rezko during the debates. Though Obama has been accused of no wrongdoing in the Rezko affair, he did–as he has acknowledged–screw up by getting into a personal real estate transaction with Rezko when the developer was under federal investigation.

For anyone wondering if there is any there there to the Rezko matter (as it concerns Obama), the Associated Press has put together a handy primer on Obama and Rezko. A few Q & As from the piece:

Q: What is his relationship to Obama?

A: He’s been friendly with Obama for years, even offering him a job after Obama finished law school. Obama turned down the offer, but a political friendship developed. Rezko and his family donated at least $21,457 to Obama – and helped raise tens of thousands more — for his campaigns in Illinois, though not for his presidential bid. He also advised Obama on the purchase of a new Chicago home and, in his wife’s name, purchased a vacant lot next to the new Obama home at the same time….

Q: What does [the Rezko trial] have to do with Obama?

A: Yes and no. Obama says he sought Rezko’s advice as a real estate developer and even toured the property with him but got no financial assistance from Rezko. Instead, Obama paid $1.65 million for the house in June 2005 by using money from a book contract and taking out a mortgage.

But Rezko’s wife did buy the vacant lot next door, which made it easier for Obama to buy the house. Both pieces of property were owned by the same couple and they insisted on selling them at the same time, but Obama couldn’t afford both. Rezko’s purchase of the empty lot allowed the home sale to go through, although Obama says Rezko wasn’t the only person interested in the lot….

Q: Does Clinton accuse Obama of any specific misconduct?

A: No. Her campaign suggests there must be something improper in Rezko’s involvement but doesn’t say what. “If the relationship was aboveboard, why won’t Sen. Obama address basic inquiries about it? What is it that he is hiding?” said a spokesman.

A: No, but he hasn’t been completely open either. For instance, he did not disclose until last month that Rezko actually toured the home with him before the purchase. He also has released the e-mail from the home’s seller to only one news organization. Obama hasn’t provided details of the fundraisers Rezko held for him, nor has he released documents related to the property, such as the appraisal of the strip of land he bought from Rezko.

So how big a deal is this? Obama was dumb to enter into a deal with Rezko after news accounts disclosed he was under investigation for corruption. Does this show Obama’s judgment was faulty? Certainly to a degree—especially since he has made ethics and clean government a top-of-the-list issue. And he has not been as transparent as possible in addressing questions about the deal. But are there major “unanswered questions,” as the Clintonites insist (hoping to portray Obama as yet another sleazy pol with something to hide)? There may be. But there’s no proof such questions truly exist outside the fevered imaginations of Clinton’s oppo research team.

Even if nothing new emerges, the Rezko business will continue to trouble the Obama campaign—because it provides just enough material for Clinton aides to work with. And they don’t need much.