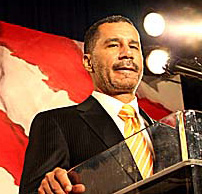 When David Paterson was elected Lieutenant Governor of New York in November 2006, he was overshadowed by his media darling of a boss, but he was a unique success story in his own right. Paterson is currently New York’s first African-American Lieutenant Governor and is the nation’s highest ranking visually-impaired elected official (Paterson is legally blind). On election night in ’06, he reflected on the promise of the new administration. “Eliot and I have a vision for New York,” he said. “I can’t see it in my eyes, but I can feel it in my heart.”

Now it will be up to him to institute that vision by himself. Not much has been made of Paterson’s gubernatorial prospects in the past; reporting on television this afternoon suggested that Paterson, who is supporting Hillary Clinton for president, was weighing a run for Senate in the event of a vacancy coming open in New York on January 20, 2009. Paterson has one of the biggest challenges of his life ahead of him.

But Paterson has already been tested. In fact, he has made a lifetime of “firsts.” He was elected to represent Harlem in the New York State Senate in 1985 and was elected minority leader in 2002, making him the first non-white legislative leader in New York’s history. When he spoke at the Democratic National Convention in 2004, he was the first legally blind person to ever do so. The son of the first non-white Secretary of State of New York, Paterson will become the first black Governor in New York history and the third black Governor in United States history if/when Eliot Spitzer resigns.

Note: An African-American named P.B.S. Pinchback served as acting governor of Louisiana for just over a month during the 1870s while the sitting governor of LA was being impeached. If you count Pinchback, Paterson will be the fourth Governor in U.S. history.