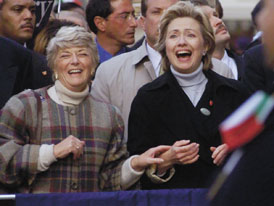 Hat tip Kos, where DHinMI has some interesting thoughts:

Geraldine Ferraro–nominated as Vice President almost entirely because she was a woman–ridiculing Barack Obama’s rise as supposedly due to his race is a case of the pot calling the kettle black.

One can laugh at the ridiculousness of the statement, or ridicule the idea that African-Americans somehow have it easier in America than white men or women. But to do so misses how Ferraro’s statement will be heard by too many Americans.

The fact is, there are a lot of White people in American who believe they’re at a disadvantage, that Blacks get things handed to them. The idea may be foreign to some people, but I’ve heard it my entire life. I’ve heard it at family gatherings, in my neighborhood when I was a kid, from family friends and all kinds of other folks. It’s not a fringe belief.

In a contest between minorities traditionally closed out of the political process, it’s inevitable that tensions like the ones displayed here (“It’s harder being female!” “No, it’s harder being black!”) will arise. But Hillary Clinton and Barack Obama have said, in very high profile moments, that they are thrilled with the historic nature of the race, and will continue to be thrilled by it even if they don’t win the nomination. Remember Clinton saying that she was “honored, honored” to share a stage with Obama? For some reason, only the surrogates can’t see the forest for the partisan trees.