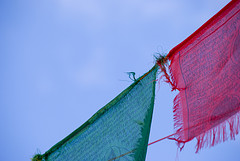 Chinese premier Wen Jiabao today accused the exiled Dalai Lama of orchestrating the protests sweeping through Tibet in recent days, with the express purpose of inciting “the sabotage of the Olympic Games.” (The Dalai Lama denied the charges.)

But the Chinese needn’t worry. Though the information emerging from the region is intermittent and often secondhand—estimates of the number of dead range from the Chinese government’s 13 to the Tibetan’s 99—what news there is seems to have satisfied the international community: The games must go on.

Over the past few days, representatives from the EU, the UN, and the international Olympic committees have stated unequivocally that any disruption of the summer event is out of the question. “Not one government leader has called for [an Olympic] boycott. A boycott is only a punishment of the athletes,” said Patrick Hickey, head of the European Olympic Committees, on Monday. Likewise, while both the EU and the U.S. called for restraint on both sides, they made no mention of any reprisal against the Chinese government.

The muted official response to the violence is surprising, given that the Olympic torch is due to pass through Tibet in roughly two weeks. A boycott may not be the best way to register the world’s disapproval. But in assuring China that the games will take place no matter what, the international community is tacitly, if unintentionally, endorsing whatever measures China might take to make that possible.