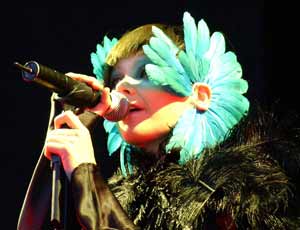 There has been a severe reaction from Chinese authorities after Icelandic singer Björk delved into a bit of a touchy subject for China during a concert in Shanghai. The singer ended her performance with the song “Declare Independence,” and chanted “Tibet! Tibet!” as the song wound to a close with the lyrics “raise your flag.” Subtle. The Chinese Ministry of Culture issued a somewhat petulant statement, saying “Some artist deliberately turned a commercial show into a political performance, which not only broke Chinese law but hurt Chinese audiences’ feelings.” No word on whether they stuck out their lower lips and kicked the ground a little. Good thing she didn’t mention that their rivers are looking a little red lately.

Now Reuters is reporting that the Ministry of Culture may crack down on foreign performers speaking their minds in China, issuing this statement:

We will further tighten controls on foreign artists performing in China in order to prevent similar cases from happening in the future. We shall never tolerate any attempt to separate Tibet from China and will no longer welcome any artists who deliberately do this.

The Culture Ministry also threatened that Björk could be permanently banned from performing in China if she, well, did it again. Hmm, I thought the Chinese Culture Ministry were better strategists than that. On the other hand, Björk has been re-invited to play the Serbian festival she was kicked off of after dedicating the same song to Kosovo at a recent performance in Tokyo. Sheesh, Björk, what’s up with the secessionist fervor?