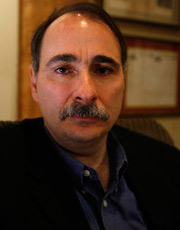 Lots of political consultants do private sector work. Hillary Clinton’s top strategist, Mark Penn, is worldwide CEO of a massive PR firm called Burson-Marsteller which is infamous for working with nasty corporate clients (Blackwater, for example) and for pioneering the use of “pseudo-grassroots front groups, known as “astroturfing,” according to a 2007 Nation article.

Looks like astroturfing is Axelrod’s stock-in-trade, too. According to BusinessWeek, here’s a description of the work his company has done for electrical company ComEd:

The Chicago-based utility says ASK has been an adviser since at least 2002. ASK’s workload picked up in 2005, as the Exelon subsidiary was nearing the end of a 10-year rate freeze and preparing to ask state regulators for higher electricity prices. Based on ASK’s advice, ComEd formed Consumers Organized for Reliable Electricity (CORE) to win support.

One TV commercial, penned by ASK, warned of a ComEd bankruptcy and blackouts without a rate hike: “A few years ago, California politicians seized control of electric rates. They held rates down, but the true cost of energy kept rising. Soon the electric company went bust; the lights went out. Consumers had to pay for the mess. Now, some people in Illinois are playing the same game.” CORE, which describes itself on its Web site as “a coalition of individuals, businesses and organizations,” was identified as the ad’s sponsor. After a complaint was filed with state regulators, ComEd acknowledged that it had bankrolled the entire $15 million effort.

And does all this touch Obama? It does. According to the article, “Illinois employees of the utility and its parent, Exelon, have contributed $181,711 to Obama’s presidential bid—more than workers at any other company in the state.”