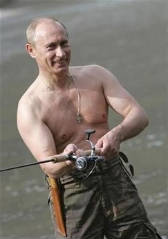 Break out your Scorpions records and your parachute pants, for the neo-Cold War is here. Just as your high school’s star quarterback now daydreams about past glories while stocking the cereal aisle in your local supermarket, Russia’s Vladimir Putin has never quite been able to let go of his KGB past. Like any member of the old Soviet elite, he’s gripped the reigns of power with an iron fist and has demonstrated his nostalgia for the once-powerful Motherland by emulating its approach to politics—the political assassinations, the press intimidation, and the corrupt, old-boy political style. Now add military gamesmanship, nuclear sabre-rattling, and economic extortion to the list.

At a Kremlin press conference yesterday, Putin and Viktor Yushchenko, his Ukrainian counterpart (disfigured after being poisoned, allegedly by Russian agents, in the run-up to the Orange Revolution) unveiled a last-minute compromise that would allow Russian natural gas shipments to Ukraine to continue. Russia’s state-owned gas monoply Gazprom had threatened to reduce supply by 25 percent until Ukraine agreed to pay down what the company said was a $1.5 billion debt. It was not the first time Putin had used the bitter chill of winter to wage what could literally be called a “cold war”—Russia suspended wintertime natural gas deliveries to Ukraine two years ago, only a month after Yushchenko’s Western-leaning regime took power after a disputed election. This winter’s threatened reduction in supply had stoked fears of a shortage and price increases in Western Europe, where 80 percent of all natural gas imports, while en route from the Russian Arctic to lucrative Western markets, must first pass through Ukraine. The compromise, reached only minutes before a Russian-imposed deadline on talks, pacified Ukraine by eliminating the participation a Swiss middleman company from natural gas deals in exchange for Russia taking a 50 percent share in the Ukrainian natural gas market. Score one for Putin.

And if that wasn’t good enough, at the press conference announcing the deal, Putin pulled out the nuclear card. Asked by a reporter for his reaction to Ukraine’s recent application to join the NATO alliance, a particularly touchy subject for an old Soviet, Putin said Russia might retaliate by targeting nuclear missiles at Ukraine, a former Soviet republic. “It’s horrible to say and even horrible to think,” he said. “Russia could target its missile systems at Ukraine. Imagine that for a second.” For his part, Yuschenko made an effort to remain diplomatic and cordial, but quickly responded that the Ukraine has the right to form alliances with whomever it likes, thank you very much.

Meanwhile, also on Tuesday, Russia offered the latest installment of its nostalgic return to military prominence, imagined though it may be, when a Tu-95 long-range, nuclear-ready bomber buzzed the deck of the USS Nimitz aircraft carrier in the Pacific Ocean, while a second bomber circled about 50 fifty miles away. Such incidents were old-hat during the Cold War, but had fallen off to zero in the years after the Soviet Union’s demise. Putin, however, is trying to reinvigorate the Soviet bomber fleet and navy with a more aggressive posture. Stunts like this may play well for Russian domestic consumption (remember the Soviet midshipman in The Hunt for Red October who rejoiced, “Captain’s scared them out of the water!”), but the American navy doesn’t seem overly concerned. “We knew they were coming,” Navy Admiral Gary Roughhead, chief of U.S. naval operations, told the Washington Post. “It was a very predictable flight, early detection, and then we just followed it in.” Navy fighters quickly intercepted the bomber after its approach and escorted it away from the carrier group. So, what was the point of all this? “I think what we are seeing is a Russian military, a Russian navy that is emerging, particularly in the case of the navy, desiring to emerge as a global navy.” Translation: The Russian armed forces are just trying to fulfill Putin’s dream of restoring Russia’s military honor. Given the state of the old Red Army, though, it will likely be a long road.