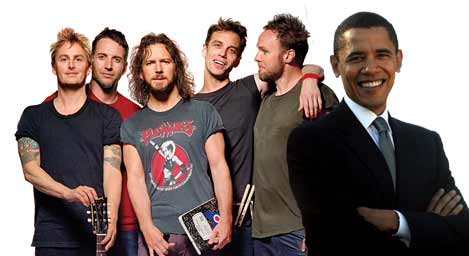 Alright, perhaps I’m biased: Pearl Jam have always bugged the crap out of me. Back in the grunge era (do I capitalize that?), I was a fan of almost all of the Seattle bands, and even 3rd-level grunge-rock like Alice in Chains and Screaming Trees landed in my vinyl collection. But I hated Pearl Jam: “Jeremy”‘s warbling, maudlin self-righteousness and aimless melody grated on me like a Celine Dion ballad, and the highest I’ve ever rated any of their songs is “tolerable.” However, the more I learned about Eddie Vedder and crew, the more I grew to have grudging respect for them; a radio show Vedder hosted in 1995 featured fantastic music, and the band’s fight against Ticketmaster was admirable (if fruitless). I realized that I like what they like, just not what they make.

So I suppose it shouldn’t come as a surprise that they’ve recorded an embarrassingly bad take on “Rock Around the Clock” in support of Obama called (shudder) “Rock Around Barack.” Its simpering, smirking chorus of “We’re gonna rock around Barack tonight” is so terrible I think I might have just blacked out after only the first 7 seconds of the thing, and when I woke up I was on the donation screen of Hillary Clinton’s website.

With Romney out of the race (and the Mega-Tuesday primaries settling nothing), my excitement over the knock-down drag-out rumble on the Democratic side has suddenly turned to abject terror: I just want this thing settled already, I don’t care how! Perhaps Pearl Jam are trying to help in their own perverted way: just like a bunch of really cool posters, a crew of aging hippies doing a Bill Haley cover for you can’t be a good sign.