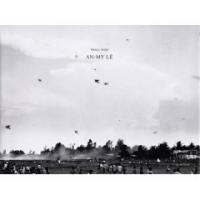 Yesterday at the San Francisco Museum of Modern Art, throngs of school vacationers made a beeline for the much-hyped Olafur Eliasson exhibit. I didn’t quite have the wherewithal to spend 20 minutes on line waiting to see trippy mirrors or whatever, so instead I left the under-10s behind and headed downstairs, where I was happy to find myself in a room with, like, four decidedly sedate adults. This was a good room for me not only because of my misanthropic tendencies, but also because of the photography series I found there: An-My Lê’s “Small Wars” and “29 Palms.”

Both series are about something we’re not used to seeing—war in an American landscape. Not real combat, but rather reenactment and rehearsal: “Small Wars” (1999-2002) chronicles Vietnam war reenactors’ staged battles in Virginia, while “29 Palms” (2003-present) focuses on soldiers training for deployment in Iraq and Afghanistan at the Twentynine Palms military base in California. On a purely technical level, this is impressive work. The black-and-white photographs are full of texture and nuance, and the composition—from vast landscapes to detailed tableaus—is impeccable.

But what struck me about these images was not their technical success. Underlying all the clean lines and sharp contrasts was a certain weirdness. The soldiers in “Small Wars” look as if they could have stepped out of 1974 Vietnam, yet instead of rice paddies, they’re surrounded by American pine forests. Lê came to the United States from Vietnam in 1975 as a political refugee, and she’s spent the better part of her career in this country thinking about landscape. In 2005, she told the L.A. Times:

The fact that battle isn’t a typical part of the American landscape (or hasn’t been for a long time) is part of what makes these images so arresting. We don’t actually fight here, and yet we still feel the need to experience war—by rehearsing for it and rehashing it—on our own turf.

“Small Wars” and “29 Palms” have appeared in galleries and museums across the country. You can see some of the images here. Check out the Small Wars book here.