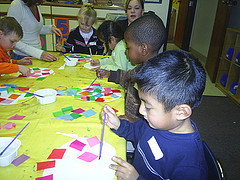 When George W. Bush took office in 2001, he came in with grand plans for Head Start, the popular early childhood enrichment and education program for low-income kids. Bush talked about beefing up standards, improving teacher training and quality, and working hard to make sure low-income preschoolers were ready to hit the kindergarten playground running. Oh, and he also wanted to turn the program into a block grant, slash its budget, and force 3-year-olds to undergo standardized testing twice a year.

Consequently, it took Congress five years to reauthorize the program, a last vestige of the Great Society poverty programs. Members of Congress from both parties saved Head Start from the block grant, better known as a stealthy way to defund the program by turning it over to the states. And in December, Bush grudgingly signed the bill that officially killed off the misguided testing regime. But one part of Bush’s original ambitious plan for Head Start has actually succeeded: the budget cuts. It hasn’t come all at once, but through erosion.

The new omnibus budget bill, signed just two weeks after Head Start was reauthorized in December, would put the program’s budget at 12 percent below the funding level for 2002, according to the nonpartisan Center for Budget and Policy Priorities, mostly because Bush has failed to let Head Start funding keep up with inflation. The budget cuts translate into about 20,000 kids who may not have access to the program anymore. This is all happening at a time when child poverty is on the rise, and the number of poor kids under the age of 5 is increasing. Insert your own favorite “child left behind’ kicker here…