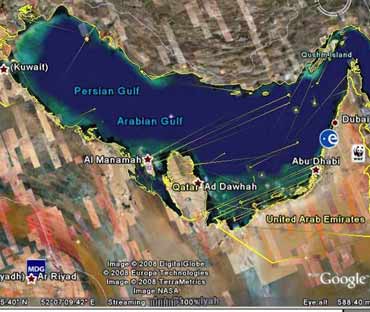 Reports Monday described how the Israeli town of Kiryat Yam is suing Google for slander after a Google Earth user added a note asserting that the town was built on the ruins of a Palestinian locality following the war of 1948. Google has said that it will not remove the note, which appears on the application’s “community layer,” because it is not “in any way illegal.”

But earlier this month another problem developed that is potentially thornier for Google because it involves the company’s official cartographic judgment. The problem comes in the form of a letter to Google’s CEO from the National Iranian American Council loudly protesting the inclusion in Google Earth of the term “Arabian Gulf”—along with the more common “Persian Gulf.”

Only a few years ago, in 2004, Google’s co-founders told shareholders that “focused objectivity” was a trait “most important in Google’s past success” and “most fundamental for its future.” But that was before Google Earth. And if the two complaints this month show anything, it’s that a map is a highly subjective thing. Including “Arabian Gulf” was a classic hedge on Google’s part, probably an attempt to strive for that ideal of objectivity. NIAC’s letter, however, explains the term’s somewhat untoward history:

The application of false and divisive references made to the Persian Gulf were first observed approximately 50 years ago, and formed part of a pan-Arab strategy aimed at diminishing the status of non-Arab influences in the Middle East. Iran and Israel, being non-Arab states, were the obvious target of this practice within the movement, initially attributed to and adopted by former Egyptian President and strongman Gamal Abdel Nasser, later promulgated and employed (violently, as evidenced by the Iraqi invasion of Iran in September 1980) by the deposed Iraqi dictator Saddam Hussein.

I talked with two experts on the region and an official at the U.N. Cartographic Section, all of whom agree with NIAC that Persian Gulf is the preferred, historically accurate term (though Robert Vitalis, director of the Middle East Center at the University of Pennsylvania, called the matter simply “an aspect of nationalism” and, in the end, “a futile, unresolvable exercise”).

As of this afternoon, according to NIAC, Google had not responded to the protest letter, nor to my requests for comment.

Google would do well to recognize that there can be no pure objectivity when it comes to political mapmaking. What would a map look like if every party’s claims were afforded equal respect, without regard to merit or consensus judgment? Should, say, Taiwan really be identified as a province of China, as that government insists? It’ll be interesting to see how Google plays the Arabian Gulf issue, if it decides to engage at all. And look for more, not fewer, controversies as the world discovers how addictive tinkering with Google Earth can be.