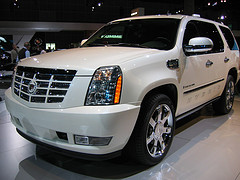 In his 2002 book High and Mighty, New York Times reporter Keith Bradsher wrote that automakers’ own market research revealed that SUV buyers tended to be “insecure and vain. They are frequently nervous about their marriages and uncomfortable about parenthood. They often lack confidence in their driving skills. Above all, they are apt to be self-centered and self-absorbed, with little interest in their neighbors and communities. They are more restless, more sybaritic, and less social than most Americans are. They tend to like fine restaurants a lot more than off-road driving, seldom go to church and have limited interest in doing volunteer work to help others.”

The research, in short, describes your average professional sports star. So no surprise, then, that on Sunday, New York Giants’ quarterback Eli Manning picked the enormous, six-ton Cadillac Escalade as his prize for winning the Super Bowl Most Valuable Player award. But in a new twist, Manning picked a 2009 Escalade hybrid, which will get 18 miles to the gallon, compared to the measly 12 mpg of the non-hybrid version. Still, the Escalade remains an utterly gargantuan car, capable of flattening a Ford Focus and parking lot pilings with ease. But perhaps in the pro-sports world, this has to be considered progress.