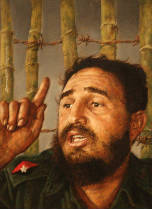 With the ailing Fidel Castro having finally announced a formal end to his 49 years at the helm of communist Cuba, a would-be workers’ utopia of his own imagining, “the ball is in the U.S. court right now,” said Congressman Jim McGovern, Democrat of Massachusetts, speaking earlier today on a conference call of Cuba experts, organized by the New America Foundation. “If we want things to change in Cuba, then we have to change.” To that end, McGovern and 103 other members of the House of Representatives, Republicans and Democrats, sent an open letter to Condoleezza Rice, requesting “a tough-minded review of U.S. policy.” (The letter notably lacks signatures from any Florida representatives.) It reads:

President Castro has departed form office voluntarily. An orderly succession has occurred in Cuba, without violence or upheaval. The Cuban government, under a new leadership, is reportedly already considering changes in the economic arrangements on the island to give the Cuban people a long-sought improvement in their living standards.

For five decades, U.S. policy has tried economic sanctions and diplomatic isolation to force changes in Cuba’s government. These developments demonstrate that the policy has not worked. Allies and adversaries alike have rejected our approach and instead engage the Cuban government directly on diplomatic issues and make billions of dollars in economic investments on the island, making it even less likely that our sanctions will ever achieve their stated purpose.

Our policy leaves us without influence at this critical moment, and this serves neither the U.S. national interest nor average Cubans, the intended beneficiaries of our policy. A complete review of U.S. policy is clearly in order now. This would send a useful signal to the Cuban people that we intend to engage with their government in new and positive ways, and also provide a new hearing for U.S. policy in many places around the region.

What are the odds that this letter (or, for that matter, any other force in nature) will have an impact while Bush occupies the Oval Office? Not good, according to this morning’s conference call participants. A panel of seven experts (including Lawrence Wilkerson, former chief of staff to Colin Powell at the State Department, and Peter Kornbluh of the National Security Archive) agreed that, despite an almost universally understood need for change in U.S. policy, political inertia will probably continue at least until a new president comes into office. Even then, a policy rethink on Cuba is not guaranteed—a candidate scorecard produced by the Latin America Working Group shows that Hillary, Obama, and McCain all support that status quo with regard to the longstanding Cuban economic embargo and travel ban.